Can't believe that October is almost over with.  The weather is certainly trying to convince us.  I woke up to a chilly 35 degrees but at least no wind.  I even had to scrape windows!  Much to early for that.  Of course the good part is that it should help everybody who has allergies.

At least it is payday.  I will officially have a minuscule amount of money for  about 1 hour.  Then I will go broke again because I will be paying bills.  Such is my life.  I am starting to get excited though about making Christmas presents and working on Dan's birthday present.  I am thinking of making him some pillow cases to match the quilt that I will be making him.  I also have a coupon for JoAnne's which will fit in nicely with that plan.  I just have to remember not to go overboard on it.

It appears that they have an interested party in the brutal killing and burning of the NIU student.  He is in Louisiana and there is talk about extraditing him to Illinois.

Elections are soon upon us.  The paper spotlighted two politicians.  one from democrat and one from republication.  Not much choices.  One has a platform of wanting to lower taxes and to form a task force with local law enforcement agencies to combat gang and gun violence in DeKalb.  Served in US Army until 1990.  Got a bachelors degree from SIU and law degree from NIU and been a practicing lawyer in DeKalb Co. for nearly 20 years.

The other one believe that gang violence is incrasing in DeKalb County and wants to combat it by attempting to reach out to kids before gangs can.  Wants to facilitate a Juvenile Diversion Program which would rehabilitate jailed ofenders and return them to society.  This would combat overcrowding in jails, lower caseloads in courtrooms and give relief to taxpayers.  Got a law degree from Chicago Kent and has been a career prosectuor and an Assistant State's Attorney in Cook Co.

I should point out that the position they are going for is State Attorney or in the states attorney office.
Posted by Bonni at 10:15 AM No comments:

Today has settled down to be chilly.  43 degrees F, partly cloudy and with the wind (gusting up to 28 mph) it feels like around 35 degrees.  The high is only to be around 40 so we will have to see.  It should be the last day of high winds.  Last night a roof blew off of one of the apartment houses on Greenbrier.  A lot of students live there but it wasn't too bad.  Nobody hurt and only 15 people were affected.  Our Red Cross was there also and soon everybody was taken care of.  Some of the students just went home and started their weekend early and some were put up in a dorm room for the night.

I have to get a schedule figured out for getting Christmas presents done.  I have four to make for the office and then a couple of ones for friends.  It will be a busy time for me and, of course, I never have enough money to get it all done with.  Looks like another trip to the storage shed to look through fabric.  The four for the office I can use plain black for a lot of it (applique stuff) but I don't think I will have fabric for the backing, etc.  Today Connie is going to our local quilt shop at lunch and I invited myself to go with her.  LOL   She doesn't mind though.  She works only two buildings over so we are in the same area.  I will look at some fabric and see if anything grabs my eye.  I should leave my money at home though so I'm not TOO tempted.

I went to Tammy Tadd's with Connie at lunch today and picked up some fat quarters to get an idea of what color I want to put with the hearts that I'm doing.  While I was there I noticed their wool and felt work.  It looked VERY nice.  That is when I came to the realization that I would have to tear out or throw out my first heart that I had done for the 20 heart project.  I didn't like it.  Going there DID give me an idea though.  I thought about the thread that I had been using on the hearts and figured out that was why I didn't like them.  Then i walked past their display of embroidery floss and it dawned on me.  I could try and use that.  Couldn't wait to get home and try it.  I had to go out to eat dinner with my brother Tony first (chinese dinner -- yummm.  garlic chicken) but when I got home I found some gold embroidery floss and did one of the hearts with that.  I....LOVED...IT!  I found what I liked and immediately sat down to work on it.  I've posted here one of the hearts where the floss shows up better.  I'm still working on keeping everything even but I'm getting better. 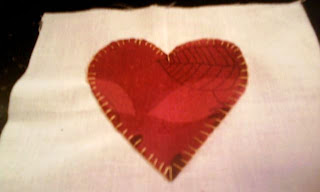 Still have the high winds.  My bosses plane was delayed a VERY long time at the airport last night as he waited to fly out to Georgia.  Todays temp is starting at 49 degrees F.  The high wind warning is here until around 12:15 p.m.  Tomorrow it is suppose to dip down into 30s.  Guess this means fall is certainly here.

I have started a new project.  It is an applique project from my quilting board Applique Group.  All of us either know applique or want to know it.  This is to be 20 hearts for a wall hanging.  I have the  hearts roughly cut out and will trim them down probably during a lunch hour.  They will be appliqued on cream colored fabric.  We'll see how it goes.  I figure I need the help with appliqueing for some upcoming projects. 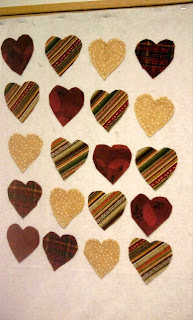 I decided that I wanted to do fall colors (and use up some fabric in my stash).  I think this will grow on me.
Posted by Bonni at 8:57 AM No comments:

It's a fall day for sure.  Overcast, 80% chance of rain and a tornado watch for most of the day.  Haven't lost electricity today so I should be fine.  It's something that we get used to here in this area.  We get a lot of watches but not always the Tornado which is fine by me.

I finished my wall hanging with the pumpkin and Connie hinted that she wanted it for Christmas.  I gave in and surprised her yesterday with it.  This was a good idea on her part because I wasn't sure what to do with it.  I like making things but don't have room to just "keep" them. 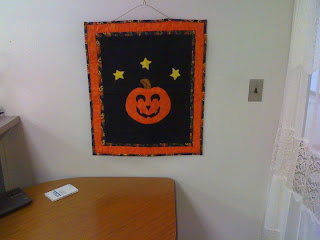 This is a picture that she took when she got back to her office yesterday.  She put it right up and plans on keeping it there until after Thanksgiving.  I gave it to her early so that she could still use it this year.  I will admit that even though my stitching wasn't even on it, it did turn out pretty cute.  Certainly looks better from a distance (grins).
Posted by Bonni at 8:46 AM No comments:

I figure the best way to catch up is not to.  There was too much happening to try and remember so I'll just start with today.  Today will be a cooler day.  The high is suppose to be around 53 degrees F.  The allergies aren't quite as bad today but I still have had to take an allergy pill.  Hopefully my last one for today.  On the bright side, my face hasn't swollen up like it did last year.

The end of October is fast approaching and I have no idea where the time went.  I have not gotten as much accomplished as I had hoped but that is life.

Work is settling down now. We are headed into our busiest season.  Lyndon is on the road a lot which means he gets to pile on the work to keep me busy while he is gone.  I have just finished up an 810 piece mailing and I know that it won't be too long before we have to get ready for another one.  This is also the time of year when I need to kick myself to start on xmas presents.  I normally make items for my student helpers and graduate assistants.  Lyndon usually gets a gift certificate but one of these years I'll make him a quilt.  My original idea for him has to change since he has lost some of the pictures I was going to use in the quilt.

My ideas for office xmas presents will entail a lot of applique work.  So does Dan's quilt so my little projects right now are to determine which method of applique I am better at and which I will like better.  I will have to stay in at lunch hours more to get some of these done which might not be a bad thing.  Since all of my work presents are going to African Americans, I want to do table runners (they can also be used for banners) which depict the symbols for Kwanzaa and/or the seven principles of Kwanzaa.  Wish me luck.

Today should be a
Posted by Bonni at 9:46 AM No comments: