I wasn't feeling good today because my shoulders are hurting.  So what do you do?  I managed to cross stitch for about 20 minutes before it was bothering them too much so then I decided I needed to cook stuff.

Now my shoulders and back are REALLY sore.  That's ok.  The movement was probably good for them.  I took some Tylenol so we shall see if that hurts.  I really didn't have much of an option about cooking.  The refrigerator was bare.  So I picked up groceries (spent $50 over my budget) so I decided I had better get to cooking.

Here are the results so far (yes I plan to do more tomorrow).  First up was the Sauerkraut Sausage and Bean Soup. 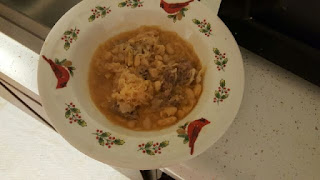 I will be making this again.  I like the combination of sweet and tangy all in one bite.

After dishing up the rest of the soup and putting it into the refrigerator, I had to lay down again.  I was wincing every time I moved my shoulders.   It's that area between the shoulder blades and the top of the shoulder.

Next up was making some Ranch dressing.  No pictures of that.  It was nothing but milk and mayo mixed with one of the envelope mixes.

Soon I was working on crock pot recipe number 2.  This one was called 1-2-3-4 Casserole.


It filled up the crockpot and reminded me a little bit of the ingredients that we would put in those foil packets to cook when camping. 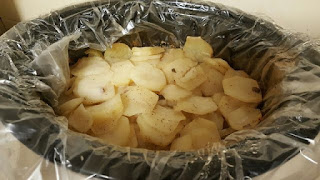 As I dished it out, it reminded me even more so of those packets.  :)   That's ok.  I liked those packets and I like this.  It needs a little bit more salt and pepper but that is to taste. 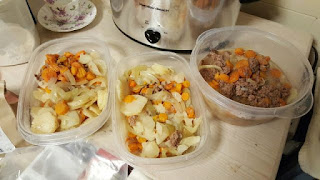 Once again it was rest time.  And, while I rested I thought about what I would do for my last crockpot recipe today.  I decided on the Western Omelet Casserole.  It takes around 8-9 hours on low so it will be cooking while I am sleeping.  I like that! 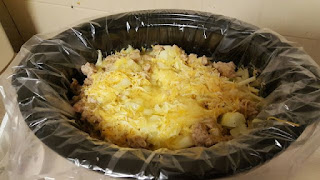 I'll take a picture of what it looks like tomorrow morning.  Aren't crockpots great?!  I love the idea of putting things in them and forgetting them for a bit.  :)

Now I am ready for bed and have a good start on my meals for the week. 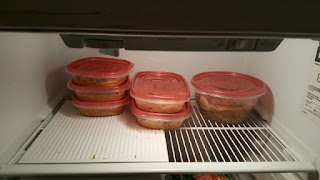 I have some more cooking to do tomorrow.  I think I will do a crockpot onion soup recipe and make some hummus.

I'll talk to you tomorrow.  I hope everybody has a great night/day.

It's getting to be that time of year again.  My friend Janine LOVES Halloween and all things Halloween.  She loves Halloween as much as I love Christmas.  Since Halloween is coming before Christmas, I stopped working on my NOEL after I finished the "E" so that I could work on a mini wall hanging to give her.  I changed up this mini wall hanging to reflect Janine's artificial leg.  She never did get the ones which looked like a real leg and just uses the metal one.  I thought she needed it to be represented in the wall hanging.  I just need to sew on the skirt and then see how I want to hand quilt it.  Hand quilting since my sewing machine is still not working. 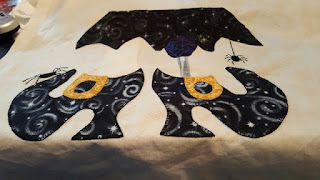 I finished up the "e" on my NOEL which is exciting since I only have one more letter to do now. 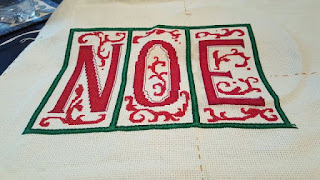 Once finished, the NOEL will be my second Christmas related cross stitch that I finished this year. That is exciting because that is TWO (2) UFOs done.

Today is September 11 and I don't have to tell too many people the significance of September 11 to the USA.  I chose to dwell on positive things though so instead I shall say Happy Birthday to my friend Theresa and thanks you to all the first responders and everybody that helped get us through that experience.

I did find this nice picture of a flag that I will share. 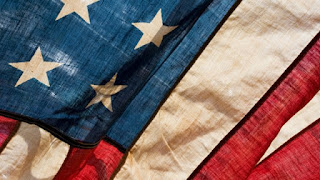 Just a snippet of a flag but I know what it represents and what it stands for.  Enough of being serious.  it is late in the night and I go to bed without bad thoughts.  How do I do that?  I watch old TV shows that make me laugh or look at cute pictures.  Tonight is a cute picture.  Take a look at this cute little guy.  Doesn't he look like a wind up toy? 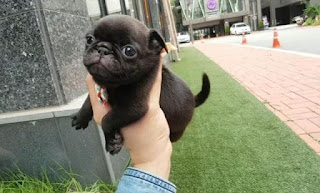 I hope that put a smile on your face and that today was a good day.  I'll see you on the next update.  I might have my next Halloween project (cross stitch I think) picked out by then.

Today was an aggravating day at work but I still managed to get something accomplished for crafting.  At noon I met with the guy who commissioned me to do the t-shirt quilt and we agreed on a layout. 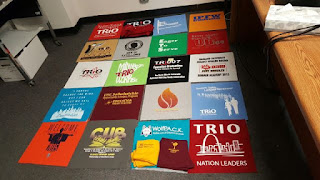 There are a couple of the blocks that I will be piecing together.  One is the top row second from the left.  It's hard to see because of the colors but the other is bottom row.  I also have to refuse some of the blocks because of transporting issues.  13 1/2" blocks just don't fit easily into things to carry.

The weekend was also pretty good.  I went to see one of my nephews first house.  This is the family with 5 kids (3 teenage girls) and the extra room will be good for them. 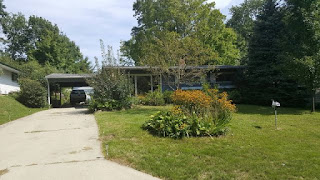 Their moving is hectic because Jessica was in a car accident in the middle of it and is just getting back to work and carefully walking around.  Still she can sit on the couch and look out the living room window which is nice.


The other thing that I liked is that my nephew, Jason, finally has space to put up some of his artwork.  he is just learning (teaching himself actually) how to pain and he found four pictures that he liked enough to put up on the wall.  The bottom four nature scenes are ones he did.  I love that he is doing this. 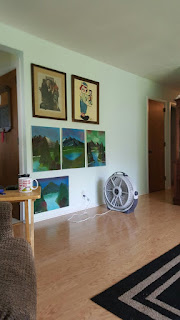 The living room is also about the only room that doesn't have a lot of boxes still in it. 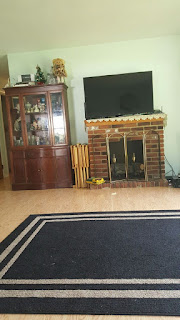 Before that I had decided to eat lunch at my favorite place on campus, the Lagoon.  This time I just ate in the car (so forgive the pix).  I parked near the entrance by the Lagoon and it was a delightful day. 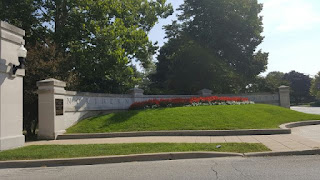 I rolled down the windows  and let the slight breeze come through the car window as I ate my brunch.  It was a nice way to start the day.

After seeing Jessica and the family, I went home and finished up stitching some wrist pads that Paul (my ex) had asked me to do for him.  I charged him (1) 2- liter for each wrist pad since he had all the materials for it.  :)  He ordered 4.  He had paid me the 2-liters earlier so I had to finish the wrist pads.  Here is what they looked like. 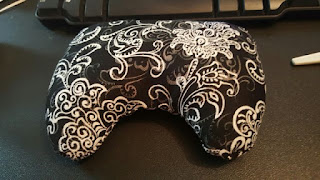 Then I went home and tried a different recipe for breakfast roll up.  It used crescent rolls, eggs, sausage links and cheese. 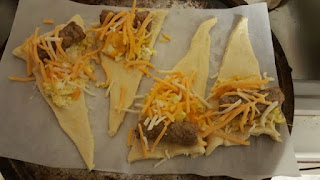 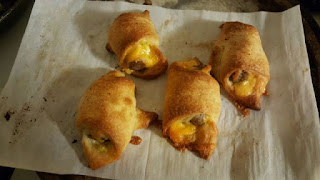 Overall it was a good weekend even if last night my sewing machine bobbin locked again and now is not working.  I'll have to try and take it apart again so I can finish sewing the t-shirt quilt.  I got mad at my sewing machine so that I switched back to working on my NOEL.  The last pix of NOEL that I posted just showed where I had the E done but none of the filigree.  Here is your updated picture. 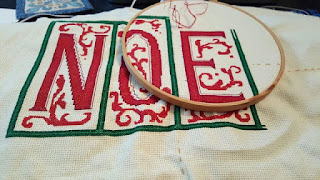 I think that I have flooded your email with pictures in this post but I do have one last pix to post.  Then that will be all until further progress on crafts.  :) 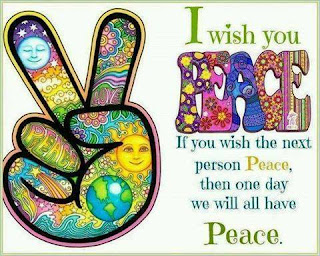