Caught up on Civil War BOM

YAY!  I caught up on my Civil War BOM blocks just in time for another one to be sent out.  Sigh.  LOL.

Here are the two that I just finished.  I must say that I do NOT like the card trick block.  LOL.  Had more problems with that and it's not great but this BOM is a learning experience for me. 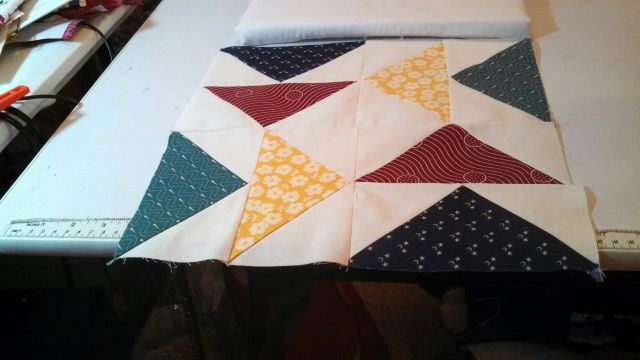 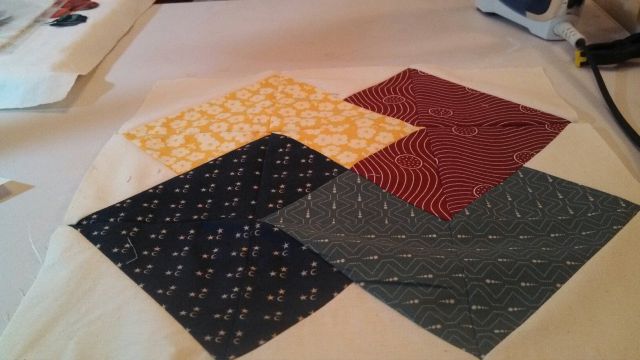 You can see the colors a little bit better in the first picture.  Can you see that crease in the second picture?  I can see that when I put them all together I'm going to have fun squaring them up.

Finally got to do some sewing today and it felt good.  Didn't get much done but at least it's back in the saddle again with some sewing.  This is a top that I finished.  Haven't put it together yet since there is a pattern that is calling me.  It still needs trimming up a little bit but I'll have to do that at work where I can put more tables together to trim it. 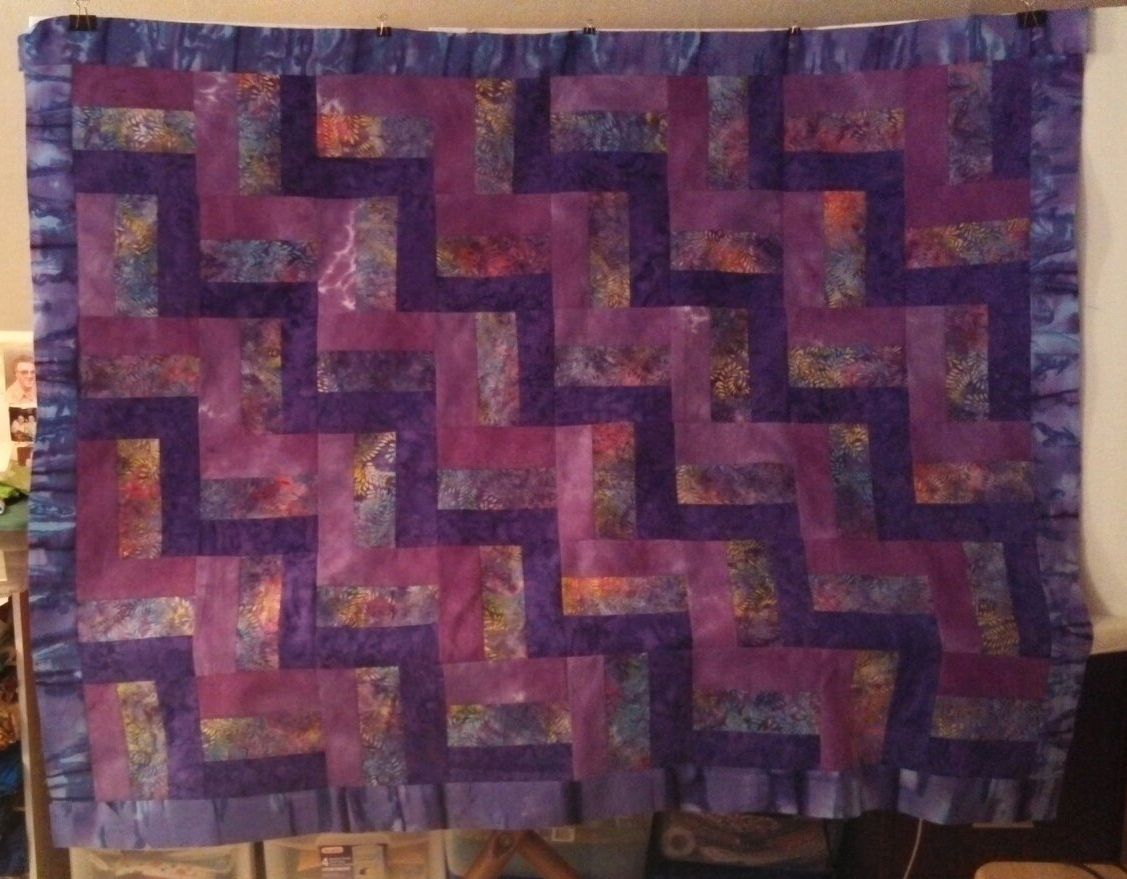 What's up next?  A zipper quilt top.

More on that later.

Time for bed so everybody have a great day/night.

Have you read Maureen Cracknell's blog lately?  This Friday there is a chance to win fabric.  Go check it out.

How much to charge for a quilt

I knew I was forgetting something.  Here is a link to an article on how to figure out how much to charge for a quilt.  Did you think of charging for the ironing and washing time of the fabric?  Go and read it.  I think you'll find it interesting.

A little bit of everything

Or.....  How Bonni's mind can't seem to focus on just one thing today.

Where to start?  Sewing machines.  A friend of mine died recently and his brother finished up giving things to his daughter.  His daughter didn't want his sewing machine (Gasp!) so he kept them thinking he would sell them or use them.  One is a portable generic sewing machine but the other is wonderful.  It's a Singer from 1947 and he has the cabinet for it, the manual and other things.  Here are some pictures. 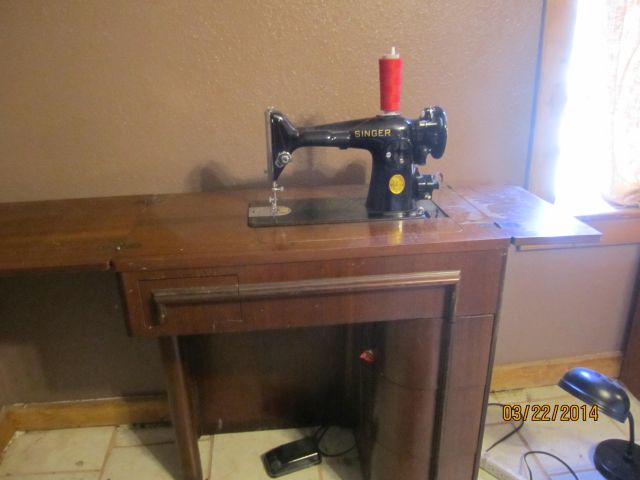 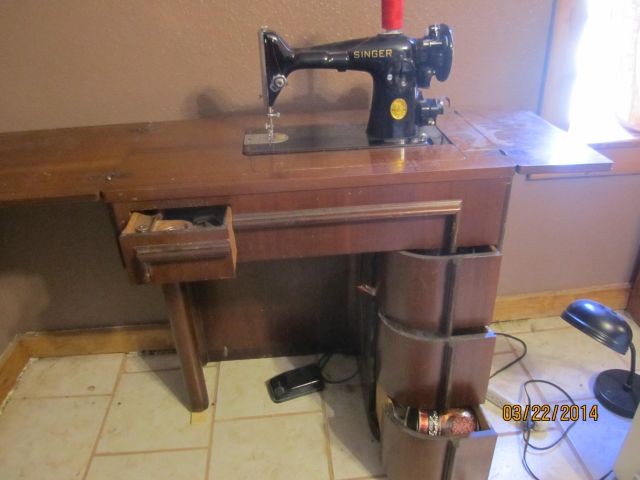 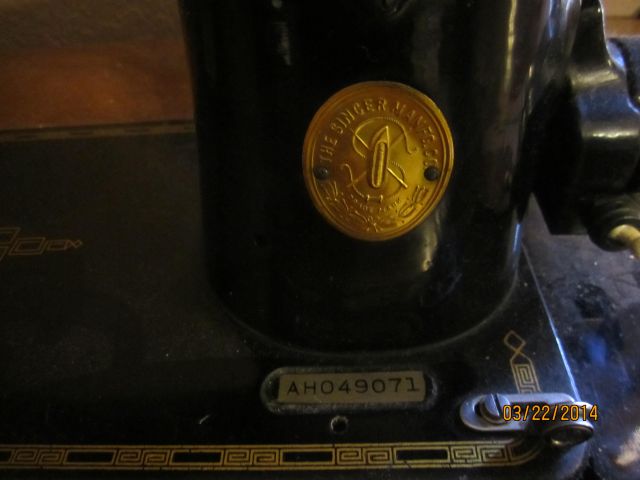 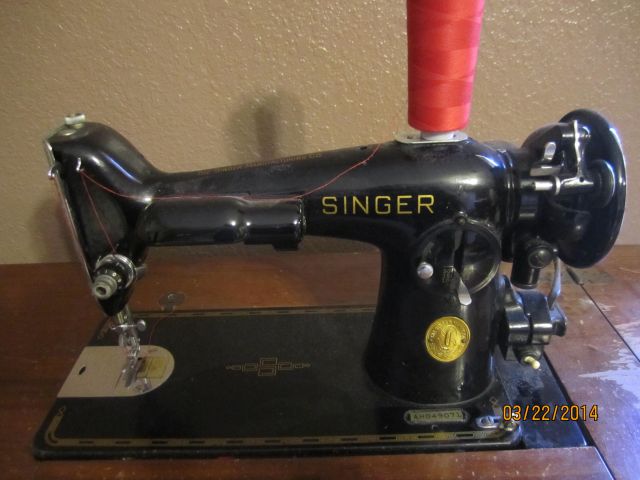 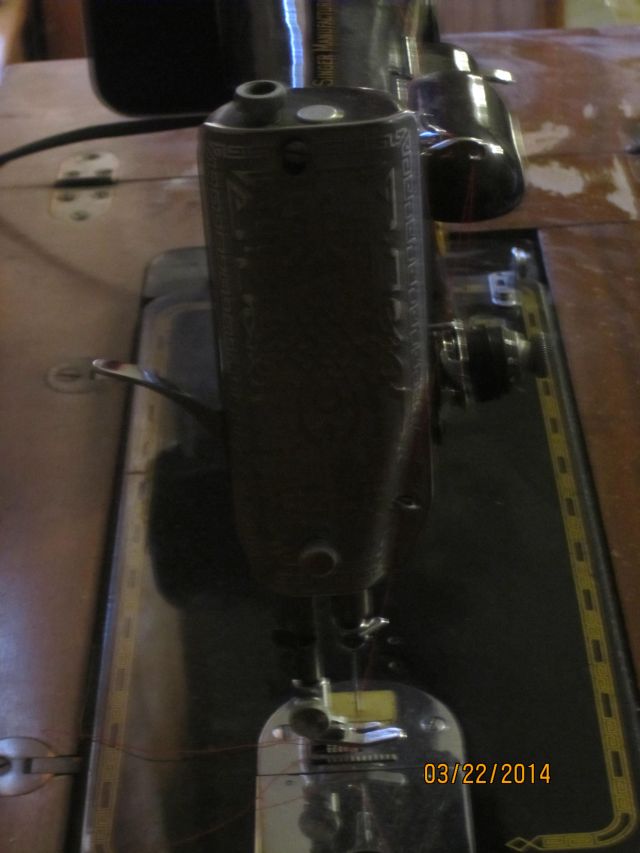 Isn't that a beaut!  It still runs so he will have to try it out.  He thinks it only does the straight stitch but as we all know that goes a long way.

So after chatting with him about that I decided to look at my magazines and this is one that I just bought today.  Don't know if any of you have seen it but it seemed to have some patterns that I will eventually make.  I looked through it while at Barnes and Nobles where I also bought a boo called The History of Vikings.  :) 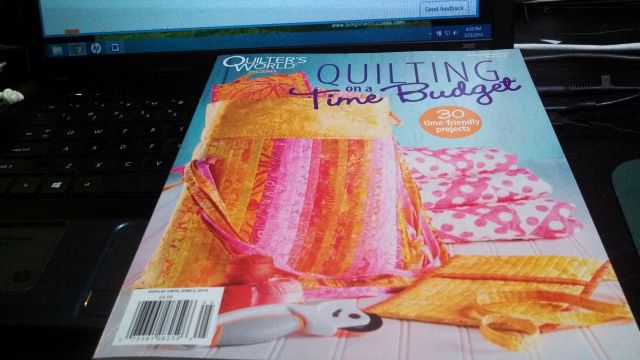 But of course before I get too involved in that, I picked up some yarn and am in the middle of crocheting some pot holders for my friend Janine.  Her kitchen colors are red and black.  I'll show you more after it gets closer to being finished.  I haven't done two colors on pot holders before so wish me luck.

How was your day?

PS:  Since you're wishing me luck, throw it in for tomorrow too since it is weigh in day.  LOL.
Posted by Bonni at 6:37 PM 1 comment:

I should be doing something quilty today since next week is my gaming week.  Do I have the ambition for it?  Nope!  Nada.  Not one bit!  LOL.  It's not that I don't have anything to work on.  I have these which are waiting for me to do....but they can wait a little longer I think. 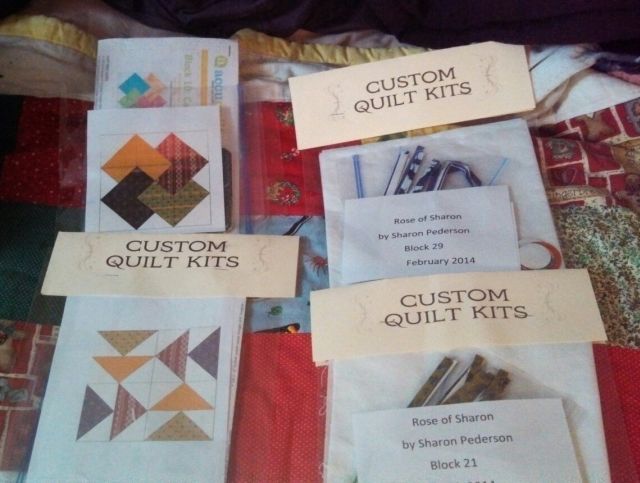 Of course this isn't ALL that I have waiting for me to work on, but I think today is going to be a lazy day.  In the mail I got these.... 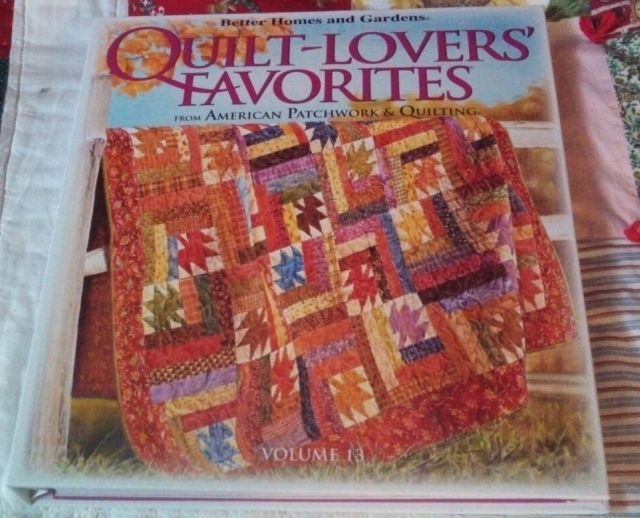 So perhaps I'll just loo through these and tomorrow I'll find more incentive to do something.

One can hope right?

Finished getting my green hexies ready to lay out for the March block of the Hexie BOM.  I might try to lay them out tomorrow at lunch when I see Connie.  I started to sew my red hexies together for the February one but tomorrow I also have to unstitch part of them.  I put it at the wrong angle but that is an easy fix. 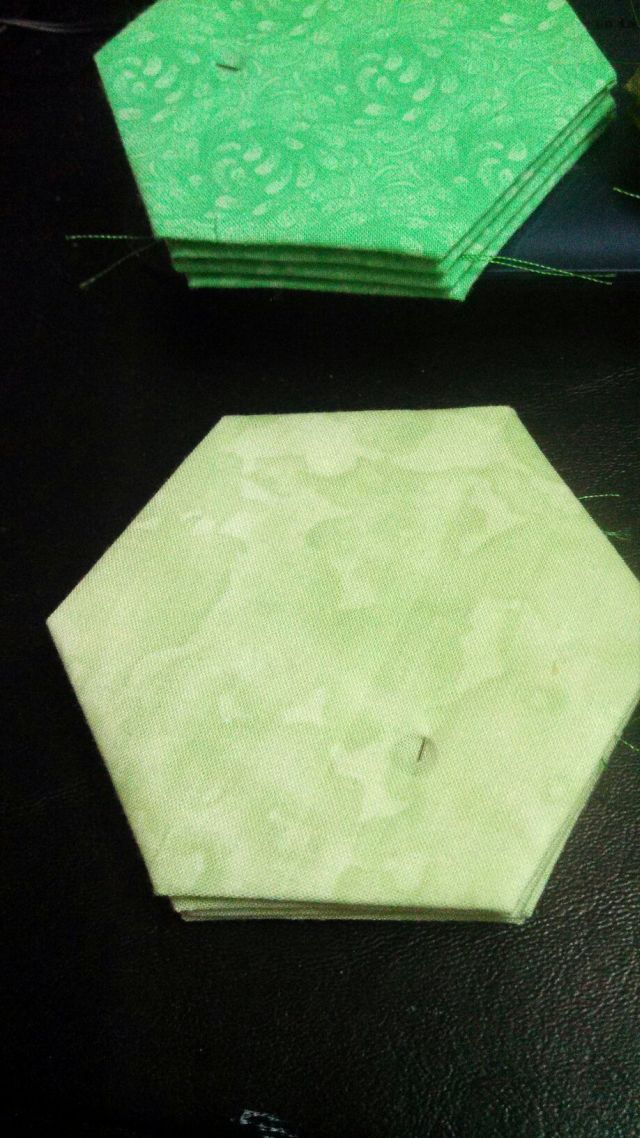 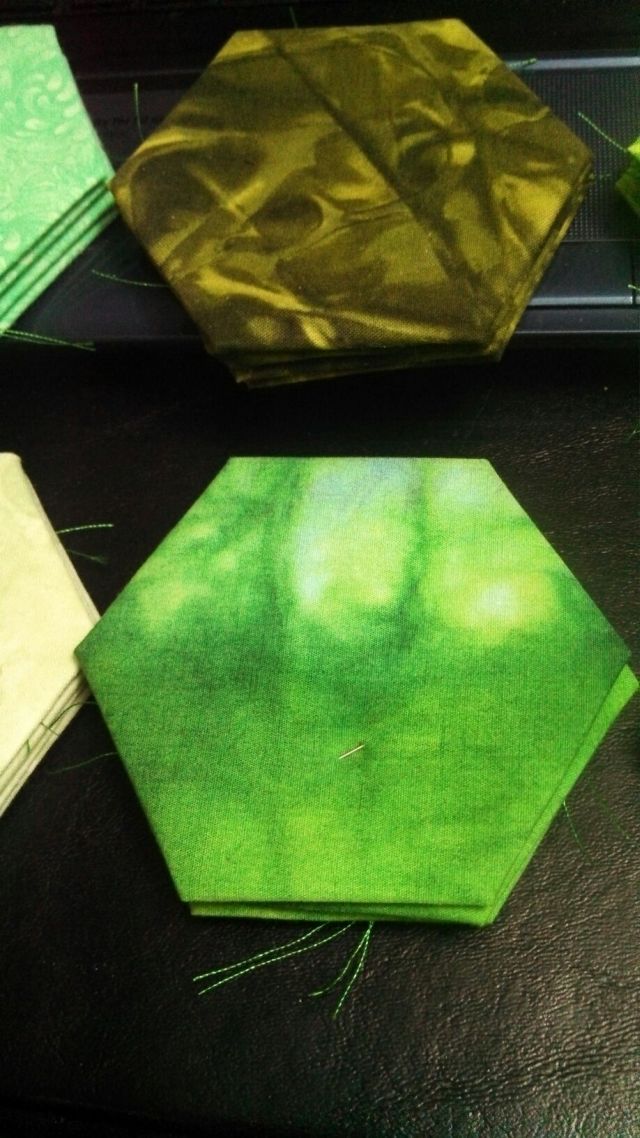 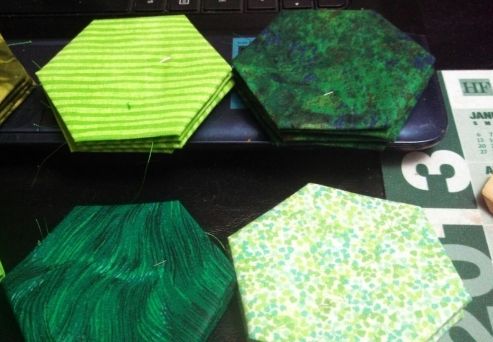 I'd better get ready for work tomorrow so I'll write more tomorrow.   Everybody have a good night/day.

Red and Green PLUS it came!!!!

What is red and green?  My table top!  I have laid out my red hexies for the Hexie BOM (February) and think I like this layout.  What do you think? 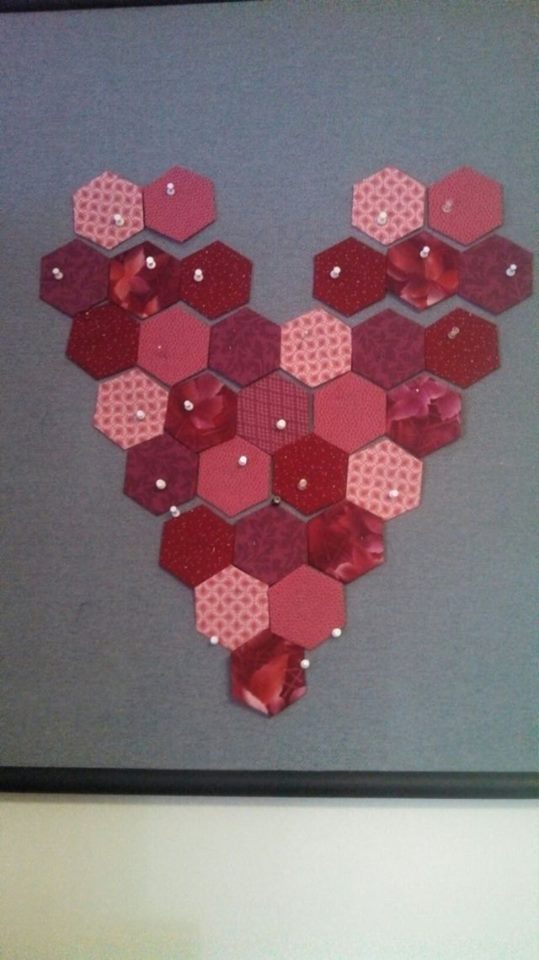 Well that is the red part but what is the green part?  Why March's block for the Hexie BOM.  I don't have them all ready to put into the layout yet but here you can see the wonderful colors that Rose from Custom Quilt Kits picked out for me. 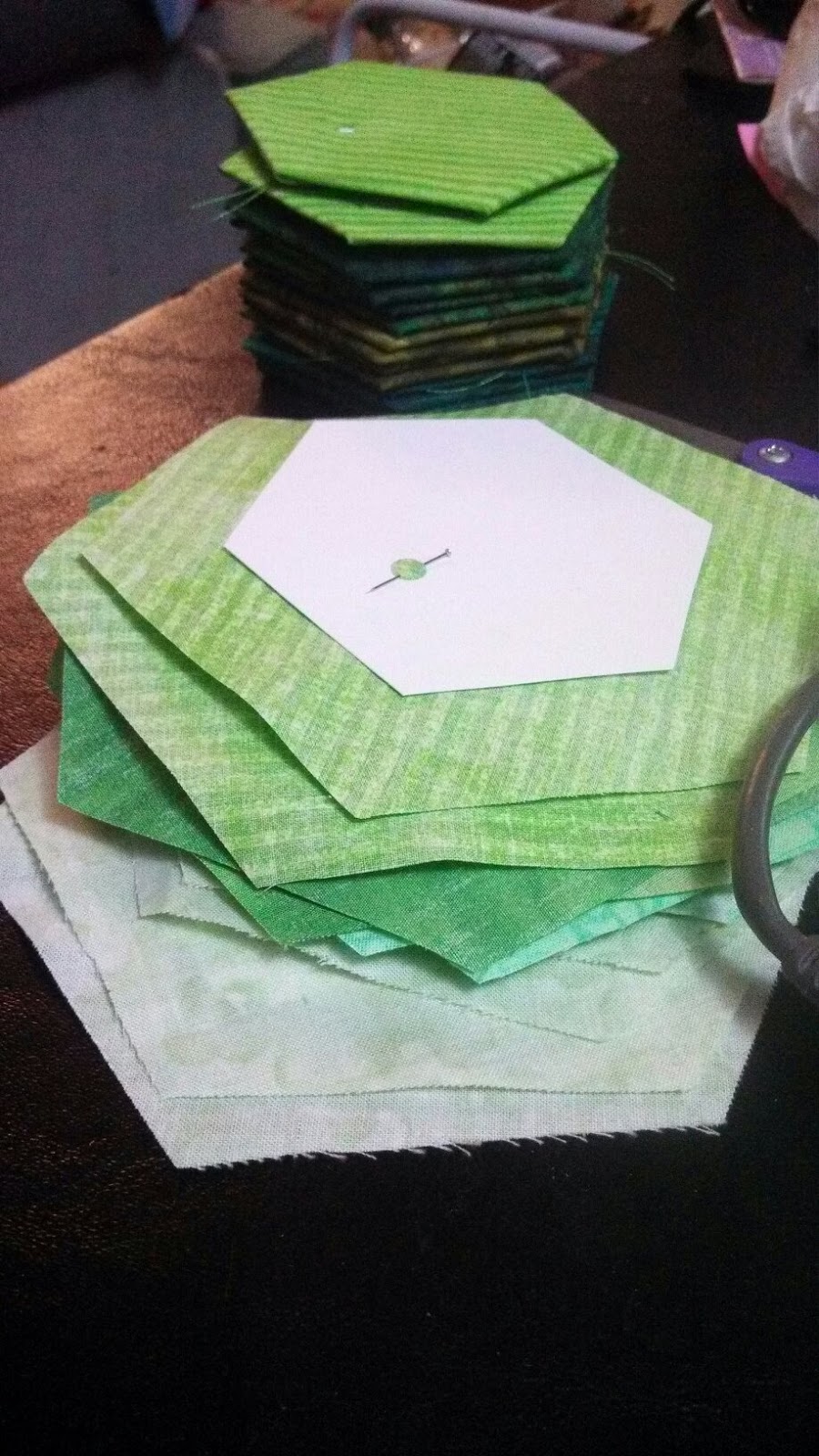 Aren't they great?  I can't wait to get to play with them for the layout.  Hopefully I'll get caught up before another month comes out.  I will be distracted for a little bit though because.....

It arrived!  IT is Block.  Block is the new magazine that is put out my Missouri Star Quilt Company.  I'm sure a lot of you know who THEY are.  This will be a great magazine and for a reasonable price ($5.99).  Perhaps best of all is that there isn't any ads in it.  No wait...something else is even better.  They have nice large pictures so that I don't have to squint to see things.  No wait..That's not it.  It's the fact that they have written up the instructions to some of their videos.  In this first issue, for instance, is the instructions for the Disappearing Pinwheel Churn Dash that they have featured in one of their instructional videos.  Isn't that great?!!!  That means if you need instructions written down to make a quilt you will have it but if you like to watch videos you will ALSO have it.  The best of both!  Check them out.

That's it for now.  Now it's time to go through Block at a more leisurely pace as well as look at the latest issue of Just Cross Stitch.

Remember when I posted that I had dropped my sewing machine?  This weekend I finally plugged it in and started it up.  YAY!  It's not broken.

With finishing up the test pattern, I can now start to work on some other things.  Just when I thought I'd have time to do a lot, mom goes into the hospital.  I saw her this morning.  That was about it.  Just saw her since she was snoring. My brother and I could hear her snores when we were passing the room NEXT to hers.  LOL.  We decided to let her sleep and went to have breakfast at the hospital.  Their food isn't too bad and it did let me get back home a little earlier.  Well at least let me start my laundry earlier so I can get back home earlier.  What did I do?

I did some cooking and then did a small mug rug.  I know.   It wasn't much but it was the March facebook group mugrug.  Unfortunately my phone bleached out the colors.  All the colors are a little darker then they appear here. 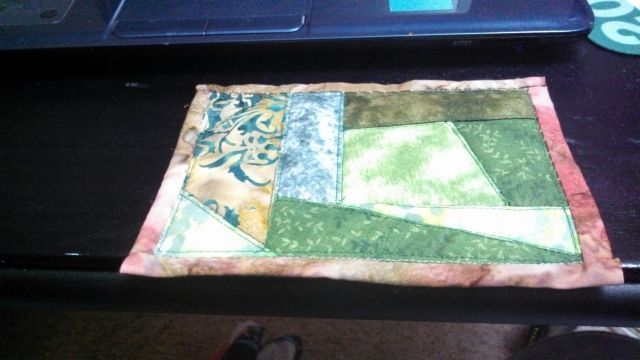 I'm not sure which side I like better.  The back is VERY pretty when seen in person. 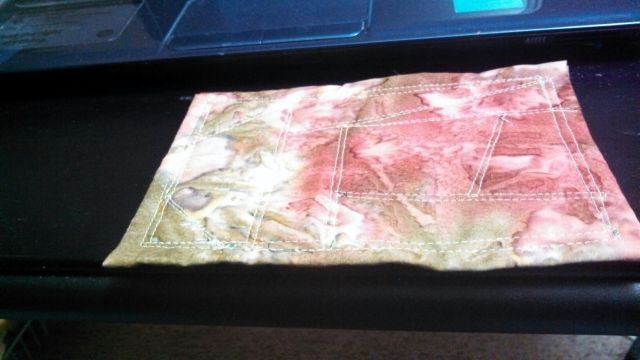 What have you been up to?

Kevin the Quilter and Quilts of Valor Blocks

This is just a quick little post to share a link to Kevin the Quilter's blog.  He has a big announcement and I think I'll be doing this.  He will be collecting blocks from people to put together quilt of valor quilts.  The pattern he has is VERY easy to do and for every 5 blocks you do, you get entered into a drawing for a $100 gift card from Missouri Quilt Company.  How cool is that?

Go here and read all about it.

The colors on his blog are hard to read at first so just scroll down a bit and you'll be able to read it easier.  I tested the link so it's good and should take you right there.

Have fun and good luck.

Happy Dar! Fabric from Ghana arrived in my office today!

I had a wonderful start to my work day.  Lyndon brought in the fabric from Ghana that he got me.  Ready to see what I got?  First of all, I went with the six different types of fabric in one bag that he mentioned.  The length of the fabric is a little over 1 yard (around 46") but the width is only around 18".  It's a different way to cut the fabric.  One of the girls in the office mentioned it was probably cut that way for when the women would want to wrap their hair/head.  That makes sense.  I'm not going to give any of it back.  LOL. 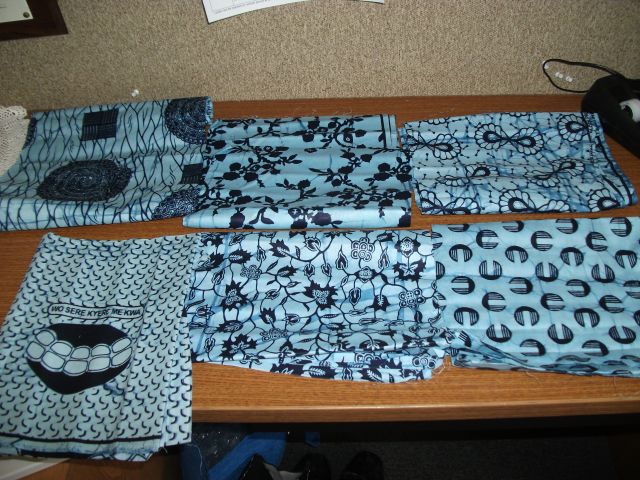 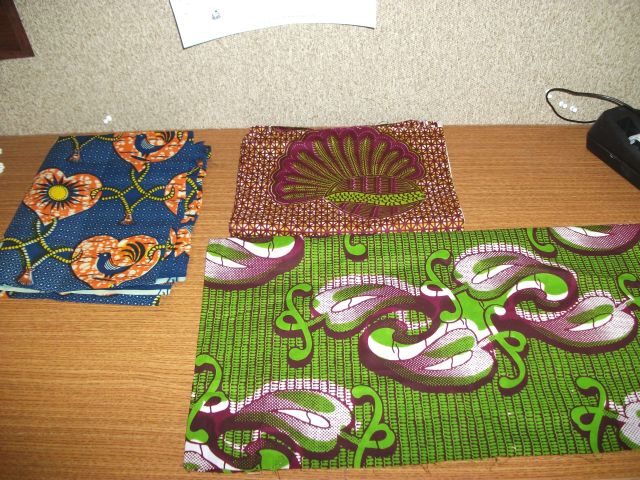 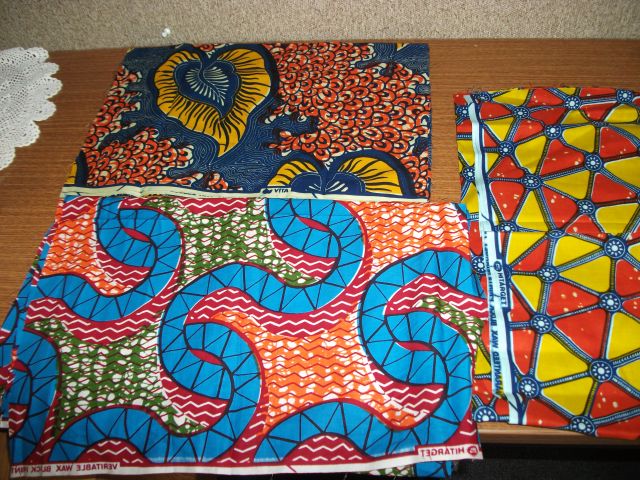 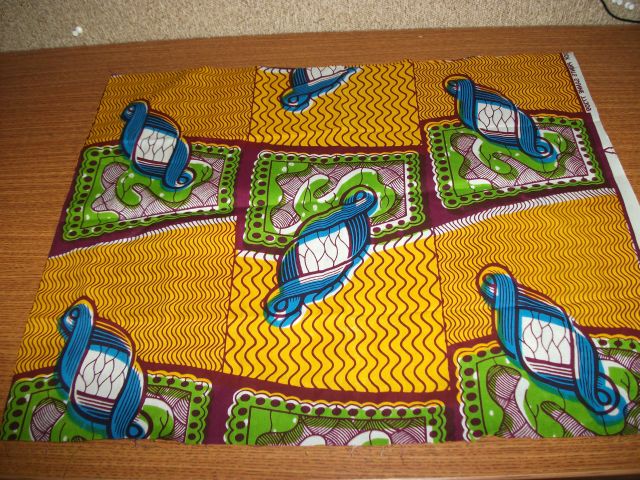 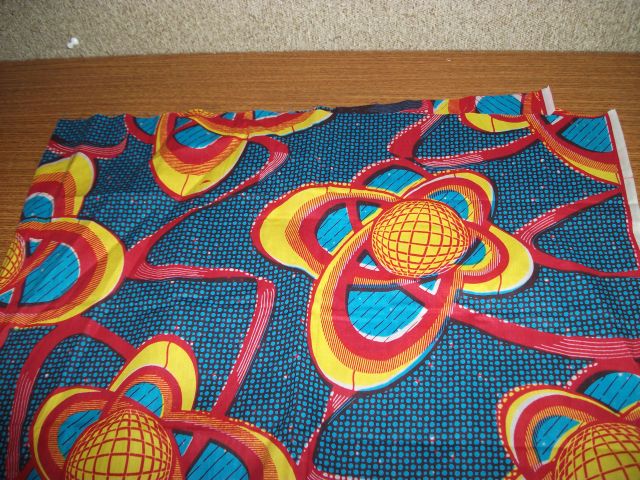 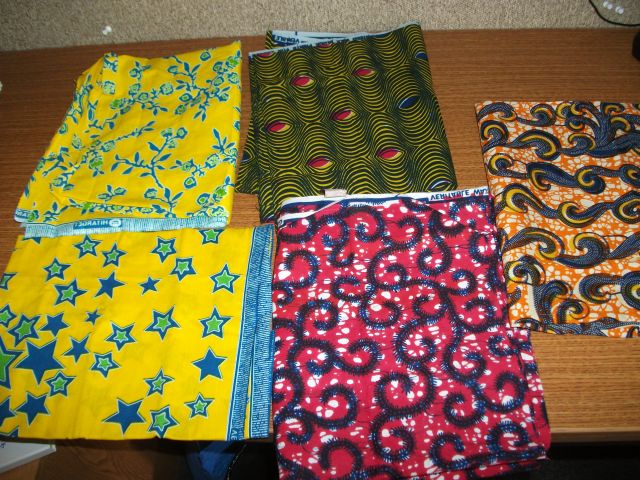 I adjusted my easy chair and positioned my footstool "just so" and gathered up my stitching.  Yes I had a Saturday where I didn't have anything planned except to make spaghetti and stitch.  Everything was going well until around 8 p.m.

That was when the needle slipped and went underneath my fingernail.  Ouch!  I took a small break until the bleeding stopped.  Of course I had made a goal for myself and I needed to stay on course.  I was stitching a test pattern and wanted to get it done mostly done this weekend since I knew I was going to be busy next Saturday.  So back to stitching I went.  8:15 the second slip of the needle occurred and this time some blood dripped down on the fabric.  Just a couple of little drops which I quickly cleaned up but it told me that I needed to stop for the night.

This morning I looked at my finger since it was still sore and I think that I scraped my finger maybe a little more than I thought I had. 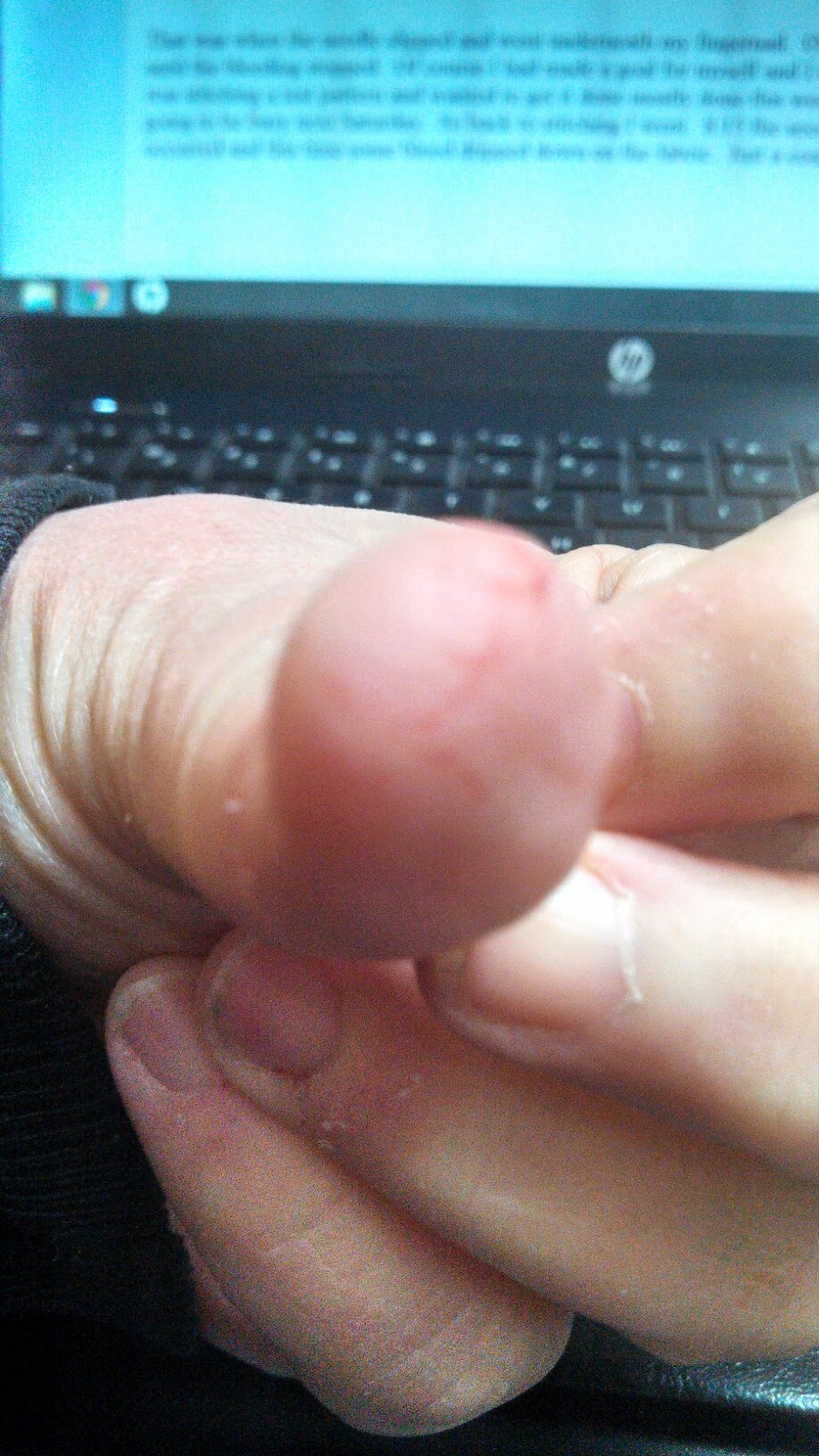 I know it doesn't look like much but boy is it tender this morning.  Will it stop me from stitching?  Of course not.  I need to finish the test pattern and stay on schedule.  I will take breaks though today.  I have a new tea pot that was made for me.  Eventually I plan on getting a soup bowl and/or plate to go with it.  It was made by Shalom Dunn in Arkansas. 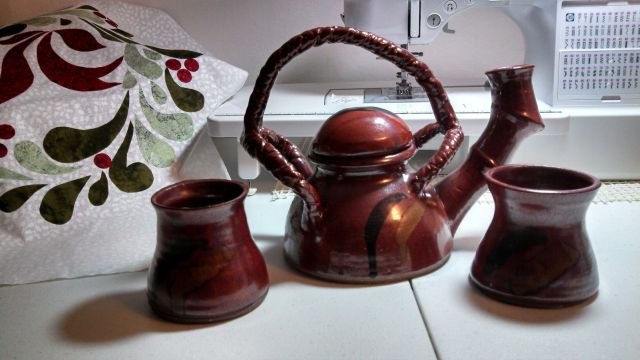 I love those colors.  They arrived safely all packed up in what appeared to be TONS of bubble wrap via Fed Ex.  :)

Hmmmm.  Now to figure out which type of tea I will make first.  Decisions...Decisions...
Posted by Bonni at 9:12 AM 1 comment:

My boss comes back to the office from Ghana next week and he went on a fabric expedition for me.  Usually he sends a lot of pictures but this time he found a place that has wrapped up six fabrics (approximately one yard each) and he asked me what I thought of that.  Such a silly questions because a) it's from Ghana, a country I'll never visit; b) it's a present; and c) it's fabric.  What's not to like?

Here is what he sent.  What do you think? 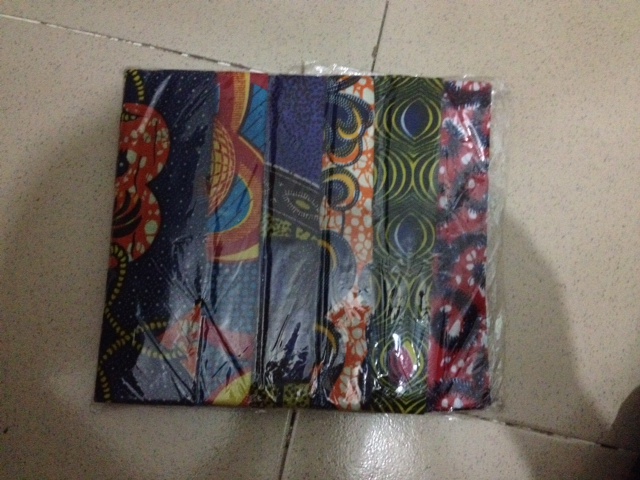 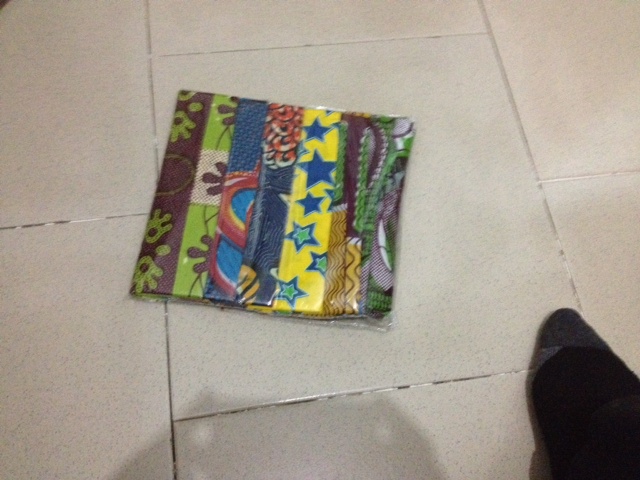