I will count today as day 1 on my vacation since it is Monday.  I was both productive and at the same time totally lazy.

I got up around 6 a.m. which is 30 minutes later than normal.  Lazed around the bed until 8 a.m. then got up and started to work on some things while Perry Mason was on the TV.  By the time Perry mason, Diagnosis Murder were over with, I had two blocks all cut out and ready to be stitched.  That's why I like watching those shows.  I can look at them and have watched a lot of episodes (my mother and my favorites growing up) I can do other things too.

So what did I do?

Since yesterday was cross stitch, today was quilting blocks.  I fused my two blocks for the Adinkra blocks and have started to stitch them down.

Ignore that blank post that you might have gotten notice on.  I hit post by accident.  LOL.  So here are my blocks.  I will stitch them down before returning to cross stitching.  The background is more navy blue in color than what it looks like in the picture. 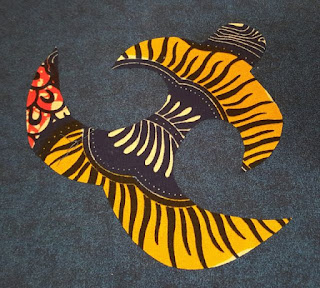 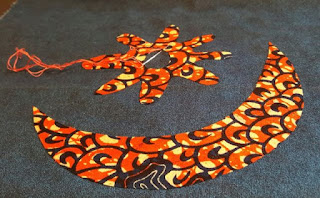 Interested in what they mean?  Go to Debby Kratovil Quilts and read about it.


I will be stitching these down by hand using the blanket/buttonhole stitch.  I have to admit that I am loving the colors in these two blocks.  I'm not sure what color of thread I'll do that first block in.  I'll figure it out eventually.  I'm still working on the orange for the second block.

That's about it.  Time to take some allergy pills which will knock me back out again.  If the snow holds off long enough (up to 6" predicted) I will go to the store and get some cold meds.  I'm coughing more and my eyes are watering.  Don't you just LOVE this time of the year?

LOL.  I know.  Shocked me too!  I finally finished my cross stitch project of the Alphabet "b" fairy. 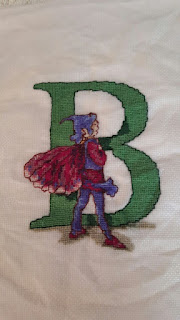 Not sure yet what I will do with it.  It's not that large so perhaps I'll...No, nothing comes to mind yet.  I'll figure it out....some decade.  It did feel good to finish something. 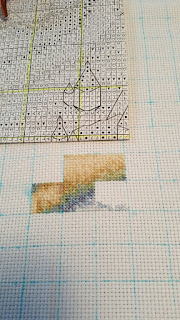 Also this week, I hope to get my fabric charted out for The Bookcase to Heaven. 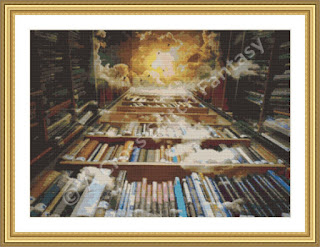 That will be another long term project.

I haven't forgotten my quilting.  This week I also hope to get some of my blocks for a couple of BOMs done.  The Splendid Sampler is one of them as well as the Adinkra one.  We'll see how lucky I get.

Time to work on some stuff so I'll sign off early.

Everybody have a great night. 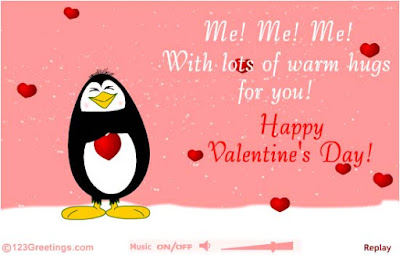 This year, I was invited to my sister in law's place for a brunch.  It started at 9 a.m. and I thoroughly enjoyed myself and didn't leave until around 1:30 p.m.

The snow had started by then. 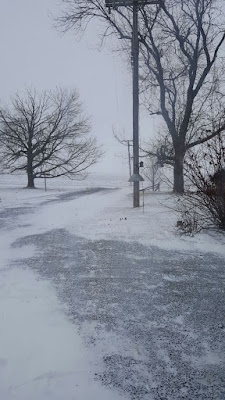 Bobbie always does a great tablescape and this year was no exception.  She had two casserole dishes and fresh fruit as well as ingredients to make Panini's.  Of course it all started off with some Mimosa's and Bloody Mary's if anybody wanted that and then the Orange Juice sort of got lost after a bit and then it went straight to the Champagne. 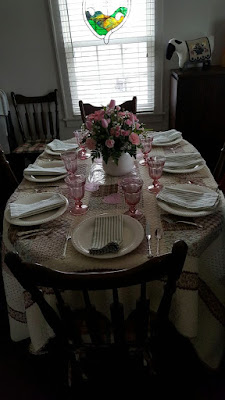 That wasn't the only thing that I did this weekend though.  I also managed to work a little bit on a cross stitch project. 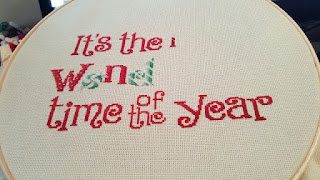 The saying in case you forgot is "It's the most wonderful time of the year".  Who knows.  I might get this finished BY Christmas.  :)

I also managed to spend a little bit time in the kitchen and cooked up some meals.  I made:

It was an interesting adventure.  I think I like them in the following order:

Jambalaya is listed last because I made it too spicy.  Of curse that means it will last longer because I'll have to do something to extend it out and to spice it down.

Connie gave me a "thing" which holds my plastic freezer bags so it made it easier to fill them up.  It really worked well with all the meals.  You can see it here in the Chili picture. 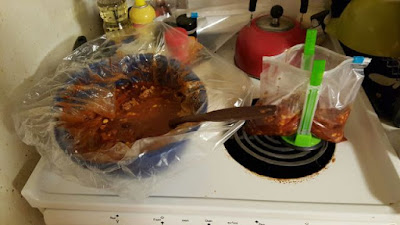 I also had an easy clean up since I used my crockpot bags.  All I had to do was to lift them up and put them in a large bowl so I could ladle them into the baggies.  Isn't that a cute little baggie holder?  It works WONDERFULLY.

So with a plan in mind, I started my cooking.


After everything cooled down, I finished sealing them and put them in the freezer.  Now my freezer has some things in it.  YAY! 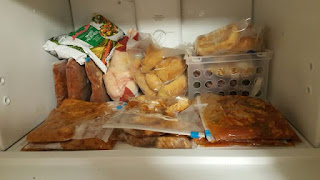 That's it for me this time.  Some of my BOM's are kicking in and I'll try to update you as I go along.

Stay safe and have fun.

While my endeavor on doing 28 ct. evenweave wasn't THAT bad, I decided to change up and switch over to it's equivalent in Aida cloth which would be 14 ct.  For those who aren't cross stitchers, 28 ct. means 28 stitches or "x" per inch.  It is usually worked two threads of floss over two threads of fabric.  Aida cloth is usually worked 1 "x" over the fabric.  I don't pretend to be an authority on this but I do know where there is an online calculator which helps me figure up what size fabric I need for something.  THAT came in handy but also didn't help with me figuring out what to do on The Guardian.  That's the gold dragon cross stitch piece I'm working on.

I started it on 28 ct evenweave.  You saw some pictures of me doing that.  Having to count every other thread etc, to make a stitch.  I wanted to learn how to do it.  My poor brain DID learn how to do it but then said "Ok, I learned how to do it now go back to Aida  cloth otherwise this dragon will NEVER get done and then he'll be pissed."  I don't want a dragon pissed off at me so I went back to Aida cloth.  Hmmm.  BUT do I have fabric large enough?  I went to the website and let it calculate how much fabric I would need.  Then I started to pull out my Aida cloth.  I pressed a couple of pieces to see how many stitches they were per inch....18...I could work in that.  Then measure them.  Nope, not large enough.  Sigh.  Then I found a piece that was 14 ct.  That would work.  Then I measured it.  Not quite large enough.  Hmmm.  If I change the border that I need then it would barely fit.  Close for me!!!!!

I did want to learn something new (besides the fact that I have Aida cloth in all the sizes I don't need) so I decided to try graphing the Aida cloth.  I've seen it done with thread marking off grid patterns as well as using water soluble pens.  As a wanna be better quilter, I had the pens so I used them. 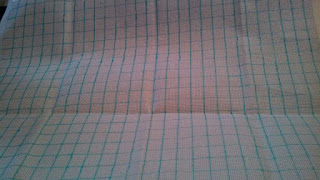 Doesn't that look good?  Each block is 10 by 10 stitches...or IS it?  I excitedly picked up my pattern, threaded my needle and went to make the first stitch.  WAIT!  It doesn't match up! But..but...but it has to!  I thought I had figured out my mistake.  I had started from the left side of the fabric and counted out every 10 stitched and marked it for my lines.  That didn't work, which I quickly figured out, since my pattern which shows the 10 x 10 grid didn't match the 10 x 10 grid that I had just done.  Sigh.

So I then got out my trusty water battle and spritzed the whole canvas and went to bed while it dried.  I had used the water soluble ink so spraying it with water made the lines disappear.  Pretty neat right?!  I love those pens.  So this morning I approached it by another method.  I found the center of my fabric again and found where it was on the pattern grid.  This time I counted my lines to coincide (I hope) with the lines on the pattern.  I think I have it right and started to take some stitches.  WAIT!  It didn't match up.  But ... but...what now!

The answer was kind of simple but annoying.  I was making my fabric every 10 stitches or so I thought.  After I looked at it carefully I was actually marking it every 9 inches.  So back to the drawing board.  The water dried quickly (thanks to a fan I had blowing on it), and back to marking it.  This time I figured it out.  Even though I was counting 10 lines or threads, I was marking the wrong corner.  See the example below.  So now that I had my fabric marked for 10 stitches (my ah ha! moment), I was ready to begin. 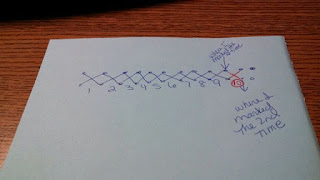 Once bitten twice shy but I was brave and took a couple of stitches.  I have five stitches done and then thought I'd try something ELSE new.  I am thinking on this complicated pattern, I'm going to stitch one 10 x 10 segment at a time.  It will be a lot of work since I have lots of color blends and changes but then I will know that block is done.  We'll see.

A not as complicated cross stitch pattern that I'm working on is my Fairy Alphabet B.  Here is an updated photo of my progress. 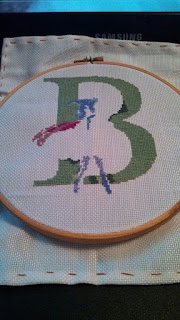 I have mistakes on this one also but I know how to cover them up better.  LOL.

I haven't given up on quilting.  In fact I counted how many 2016 BOMs that I'm interested in collecting and I believe the number was around 13.  That's why I said collecting.  I'm not sure how many of them I'll get to work on.  The first one I started was a bust (Westering Women).  I will try again but am almost questioning the block cutting directions.  That's for another day.

I did manage to catch the sale at thousandsofbolts.com   I order three 108" wide fabrics. 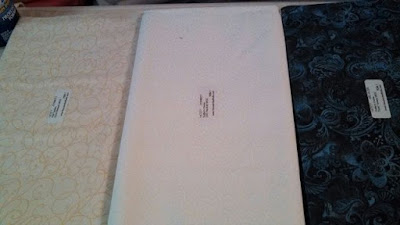 The middle one is a white on white which I can use for my applique blocks.  The gold on cream was too pretty to pass up as was the blue on the right.  I'm sure I'll find a use for them.

I also was brave and sewed up a simple (super simple) little bag that had a zipper.  Now realize that I am terribly afraid of sewing zippers.  I haven't even attempted one since the fiasco in Home Economics sewing class around 1972!  But I found a YouTube video that sort of made sense and right afterwards I stumbled upon a zipper that I didn't know I had.  So I thought it was a sign.  I finished it, it's large because it was the only zipper that I had to work with but not too bad.  It's large enough to hold my Fairy Alphabet B supplies.

The zipper still isn't right in it but for my first attempt after such a long time, I am still sort of pleased with it.

That's my catch up report for now.  I thought that I would finish with a cute picture.  Enjoy and have a great day/night. 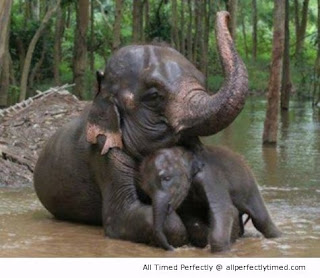