I have now gotten permission to post pictures of a pattern I tested for The Quilt Pattern Magazine.  Go visit them at their website:

Anyhoo (my brother Tony's favorite word), here are two pictures of the pattern I tested.  I am posting two  different ones just because some of the colors show up better in the lighter pix (Drifting Leaves 2) although Drifting Leaves 1 is more accurate for the darker fabric etc. 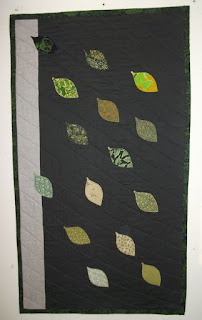 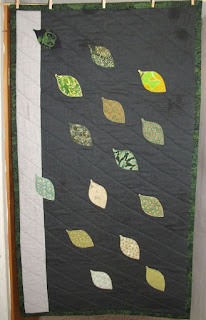 It was a little different.  Seeing the grey/silver stripe on the left as the tree from which the leaves are falling from and doing a little sweep of my quilting lines down at the bottom as the wind.  Still it will be good to hang up when it gets cooler.

Everybody have a great day!

Happy Birthday to Me!

Yep that's right.  I am 61 years old today.  Wait...is that correct?  Hang on while I dig out a calculator.  Yeah, that's right I have to use a calculator now to verify my age.  Oh well.  I still love my birthday because it beats the alternative.  So I dug out my Queen of everything cup to use today at work. 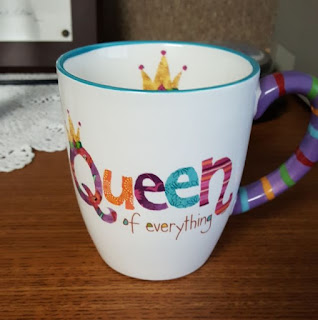 I also put some flowers that I received from a friend on my desk and let my friend George the Dragon help guard them. 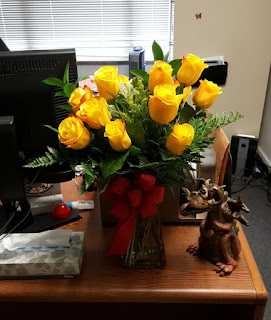 Along with the flowers came some caramel brownies but I didn't think of taking a picture of them.  They were washed down with some wine.  Perhaps that is why I forgot.

I didn't forget, however, to snap a picture of my progress on the mini owl.  You can just start to see the rings of the Celtic part showing up. 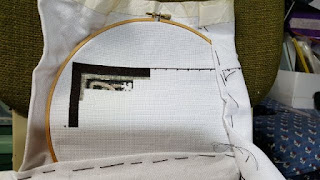 Well it's after 8 a.m. which means I should get to work but wait!  There's more!   One of my co-workers brought in treats for me AND flowers.  Thank you Debbie! 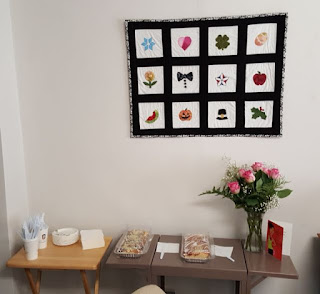 I hope everybody else has a great day!

Can you believe that it is already July?  I can't.  This year is flying by.  I don't have much to report, or at least that I can show, right now.  I'm busy working on a test pattern which means no pictures or anything else until I get it finished and it gets published.  I finished one up to report on and now have a second one.  Hang in there.  I'll be back to working on other projects which I *can* show you after the 15th.

In the meantime how about a picture of my tomato plants for my aerogarden?   I think I almost killed off my lettuce but that's ok.  I got to eat it around 5 times.  I think I cut too much off but only one type of the lettuce really did good.  I'll have to think if I want to grow that again or not.

BUT here are the tomatoes. 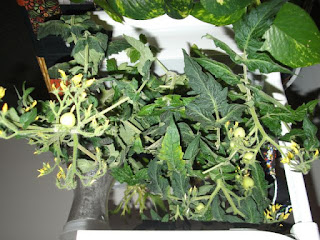 I think that I caught about 5 or 6 tomatoes in this picture.  These are small than cherry tomatoes.  Would that make them about the size of grape tomatoes?  They are called mini cherry tomatoes so we'll see how large they get.

I received my areogarden catalog in the mail and am tempted to either do herbs or regular flowers next.  Now sure which.

Back to the Test Pattern.

Everybody have a safe  and happy holiday!
Posted by Bonni at 9:59 AM No comments: