It's Sunday and I am getting back into my routine.  That means time to do some stitching on Sunday.  I have some (aka - a TON) of applique projects to work on so finding something to stitch won't be a problem.  It will be harder to figure out WHICH one to work on.

I have a couple of small projects which need to be done in a couple of weeks.  They are Test Patterns so I can't show you those.  I will start to prep them at least today.  There are some Splendid Sampler 6 1/2" blocks that have some stitching on them.  I might try and work on those too.

Yesterday was a good day for getting some things done.  One of the blocks for the Splendid Sampler was a mini churn dash.  I decided to make mine bright.  I wanted to bring in some color so here it is. 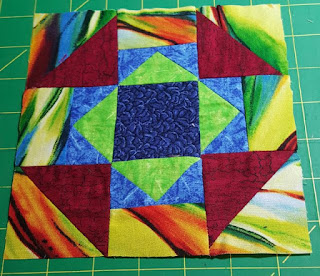 This is a larger picture of the multi colored fabric. 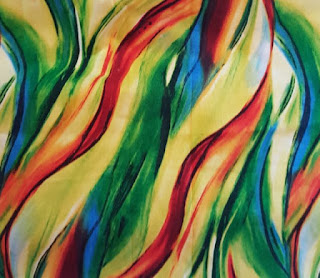 I'll probably never be good at piecing but I am getting a little better.  Perhaps one day I might enjoy it but don't hold your breath.  I keep trying though.

To push my boundaries with piecing, I am doing a starburst design by Missouri Star Quilt Company.
I have two quadrants (of four) done and pieced together.  This is a bad picture but I'll take a better one later. 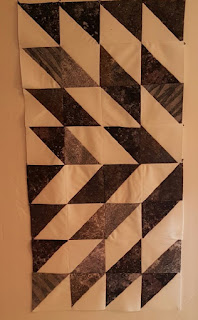 It's a black and white piece.  I will probably put a black border around it.

What will you be stitching today?

My day was a mixture of things.  I tried to do one of the Splendid Sampler blocks (6 1/2") which was teeny hexies.  The template for the hexies is around 3/4".  My big fingers didn't like that so I have put that aside to try later.

I did, however, finish up May Adinkra block.  I hope that this week the June block will be out.  Here is a picture of all my Adinkra blocks that have been done so far.  I can't believe that I'm up to date with that BOM.  It might be the first one that I've managed to keep up to date on.  :) 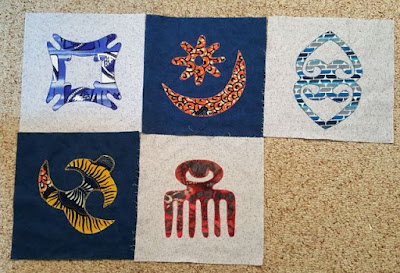 I was on a roll so I decided to do something a bit different for me.  I did....drum roll please...Half Square Trianges (HST)!!!!  What brought this on?  I mean now?  I didn't want to do them when they were the bucket list drawing but now I do?  Jeesh.  I need to get with the program.  :)

The reason I was doing them was because I watched the Missouri Star Quilt Company video this week about the East Starburst Quilt.  You can watch it here if you haven't seen it yet.


They used 10" squares to make this large Starburst but I had some precut 5" squares so I dcieed to make a smaller version.  I have all of my HST cut and sewn together and laid out.  That is where I stopped.  I took a picture of it (see below) and I will look at it in a day or two to see if I still like that layout. 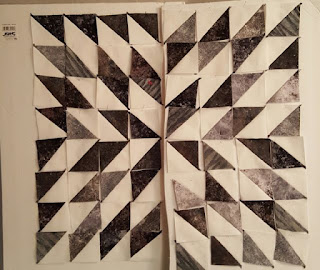 Like the one from Missouri Star Quilt Company, I am doing mine in black and white.  Well in shades of it anyway.  I had a Stonehenge stonechip pack so I know that the colors all go together and I had a charm pack of all white 5" squares.  So mine is around half the size as the one they did for the video.  It's not lined up right in the photo since I had to lay it out on two different boards and they are just pinned on.  I can see some little changes I will want to make before sewing it all together.  Then after that I will put on a black border.

Time for me to sign off for the night.  Tomorrow is a busy day at the office tomorrow.  Truman State University McNair Scholar's are coming out on campus for a site visit so I will be busy with them until around 2 p.m.

Everybody have a great day/night.  Until next time...happy stitching.

How have you been?  Today has been a busy day of stitching for me.  It's too hot to go outside, plus I'd rather stay in, so I picked up my cross stitch and did another 100 stitching or 1 square on The Guardian.  No pix this time.  I'll take one when I get another 100 stitches done.

That's not all.  I managed to get two blocks done on the Splendid Sampler this weekend!  I am so far behind on them but that's ok.  I save them all and just work on them when I want to or have time.  I wonder how many 6 1/2" blocks I'll end up with.  If I do them all, which I'm not, there would be 100.

Here are my two blocks that I finished this weekend. 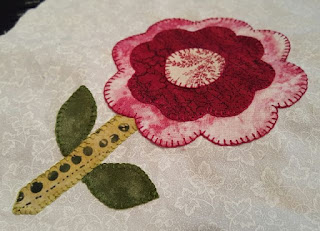 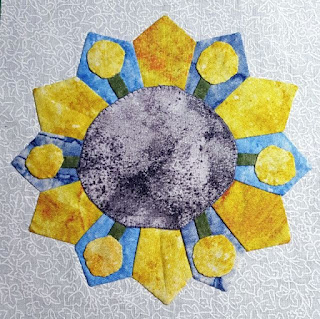 The dresden's were terrible to make.  The finished size is barely 6 1/2" so that meant the green stems were 1/4" and the small circles around 3/4".  Yes, those are suppose to be circles.  Same as the center.  Don't blame me.  I can't draw circles, never could, so this was the best I could do.  You can kind of figure out what they are but by the time they are in a quilt and you see it from a distance, they will pass.  LOL.

Here are the other blocks that I have finished so far.

That's my progress report this weekend.  I hope everybody is enjoying their weekend.,  Until next time....Happy Crafting!