Now, before I get all excited about the Thousands of Bolts order, let me post my attempt at FMQ with Sophira.  It's my best attempt so far but I still have a long way to go.  It's a start. 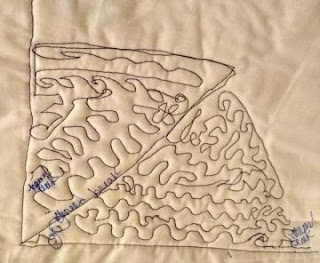 I didn't have any pattern that I tried to do but just wanted to get used to the machine a bit.  It will take me a bit to get used to Sophira and try FMQ.

I order a ton of fabric from Thousands of Bolts (and only one nut) on the 21st and it came TODAY!  YIPPEEEEEEEE!!!!!!!  (cough cough).  Sorry about that.  Didn't mean to yell.   Want to see what I ordered?  If not, then you probably should stop reading now because I took pictures of the fabric.  All except to panels which I'll take a picture of at work.  I can hang them up there to get a better picture.  I don't normally do panels but these were cut enough.  One is very cute and the other one is very patriotic.   Now on to the pictures.

Not sure why I ordered this but it caught my eye and it was on sale.  Enough said on that one isn't it.  LOL 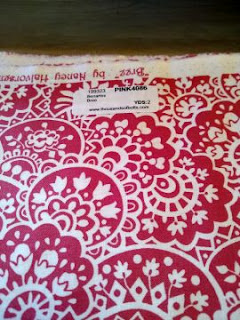 This is another one that caught my eye but I don't know what I will use it for.  Feel free to give me suggestions. 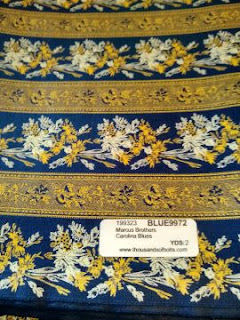 Aren't they pretty?  They feel so gooooood.  Especially the Stonehenge.

More to be posted tomorrow.  :)

It's windy in DeKalb, IL today.  I'm sitting at the computer, which is in front of the window, with a crocheted lap throw AND one of those $2 thin blankets over my lap to try and keep somewhat warm.  Yes I have my windows covered up but you know it still gets cold in the room.  You guys are worth it though.  I took a short video of the flags blowing in the wind this morning.  Hope you can see it.

I haven't done a lot today but did manage to try to stitch a bit on Sophira.  That's the official name for the new sewing machine.  Actually she has three names.  I was told she needed three names for when she is acting up.  Just like you know you're in trouble when your mother called you by your full name.  So Sophira's full name is:

She got called Sophira today.  The bobbin didn't want to stay in.  All I can say is that I'm getting better at threading the needle.  I still need to learn that automatic threading feature soon.  It will take a bit to get used to putting in the bobbin from the side.

I had some good mail this week.  Here is one of the goodies that I received. 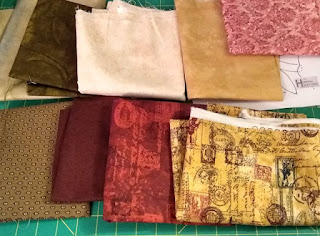 The lower yellow and red fabric is call pony express.  It has cancelled postage and little riders on it, etc.  I will also take a picture for the next post of the non fabric items that was in the envelope also.  Including a necklace from hand made beads (from paper and fabric?) and a pin cushion that is worn on the finger.

I bought something that I had been looking at recently.  I have seen the Infomercial on the TV and was pleased to see that it was accurate.

It is rechargeable and has a high beam, low beam, and an SOS beam which I thought was a bit different.  On low beam a full charge can last 12 hours.  It is charging up now but I used it a bit for that "extra light" for my applique on LeFleur.  I have to use black embroidery floss so more light is better. 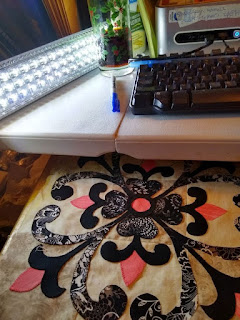 I have to leave you now but I'll return when my new goodies come in.  I have more fabric and a some "scraps".  That will be fun to see since I have no idea what the fabric will look like.

I'm still looking for a name for my new sewing machine but I will think of something sometime.

I did manage to learn how to thread her.  There was a bobbin already in it that was threaded so I didn't change that yet.  I grabbed up some of my extra bits and pieces of muslin and throw outs and decided to see if I could get them sewn together.

Ok, it might not have been a big experiment or anything but it seemed traumatic and wonderful and scary to me.  LOL.

So, here is the new machine.

Isn't she cute?  Look at her now before she gets all banged up from me goofing up or dropping her, etc.  She is a Brother PQ1500SL.

This next picture shows all the attachments she brought with her. 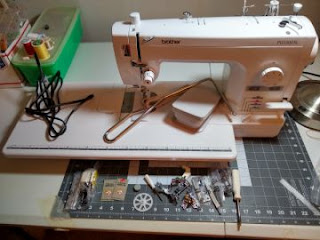 And, of course, I had to snap a picture of the test stitching.  I used brown thread for the top thread so I could see it better.  The one picture is white bobbin thread and is hard to see but I think that the tension is set right.  I couldn't figure out how to do the automatic thread thing yet but I'll try that another day. 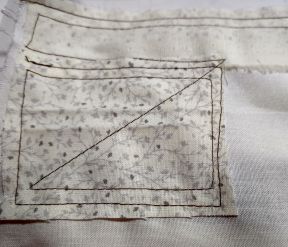 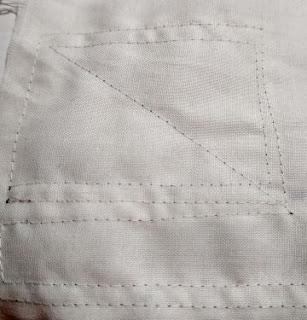 I wish I could have afford a machine that did a nice satin stitch but I'll take a good straight stitch with a wider throat.

Until next time, everybody have a great day/night.

I am excited.  Tomorrow I am suppose to get a new sewing machine.  This will be the first sewing machine I've ordered by mail so keep your fingers crossed that it gets here ok.  I didn't have a lot of money to spend on it but because I got my income tax return, I was able to set aside $600 for it. 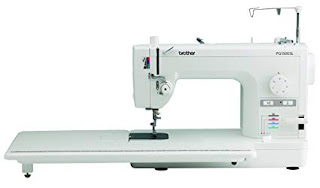 Then I decided I needed to go for a ride.  I didn't go far, just over to the Walmart in Rochelle (around 20-30 minute drive) but I did find some material that I think will be good for leaves and wreaths for some projects.  I've laid them out against the background fabric (cream) and am trying to decide which I'll use for leaves.  This is for the Civil War Nurses BOM. 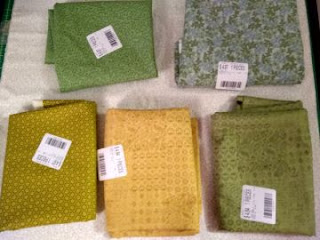 My fall back would be the top right.  I also like the green that is bottom right.  The green for leaves that I originally thought of is below.  It has some sparkle to it which I like but would it be good for a Civil War applique?  I'm not going to be able to use only fabric from that era but do I want to go so far off?  What do you think? 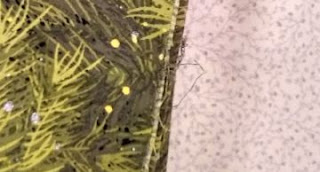 It's hard to choose isn't it?  So while I was thinking and driving back to DeKalb, I decided to stop and get my hair cut. 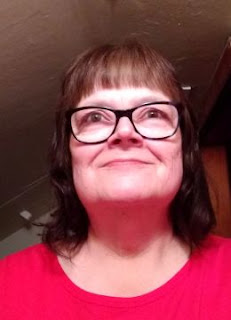 It was good to get it chopped off.  I love my long hair but every once in awhile I get it cut shorter so that the ends and everything get taken care of.  It's a wash and go style so that will be nice.

Time for me to get back to taking care of some things so I'll say good bye/good night to you all.

I haven't been on for a bit due to weather and sickness, etc.  Also include in there just laziness and winter blah's.  However, I DID want you all to know that I appreciate you sticking with me and reading my blog.

I will be posting as soon as this headache goes away.

In the meantime, everybody have a great Valentine's day and remember to love yourself as well as others.

Welcome to February!  Of course it isn't as all heart warming as one might think but it is still better than January.  January, in DeKalb, Illinois, was wind chills of -53 but February started out in all positive numbers.

Since it is February, it also means that I got to pick out which UFO I would be working on.  I am so happy that it is a bright and fun UFO.  It is the Dinosaur quilt/wall hanging.  This is from FatCatPatterns,com and has two different dinosaurs patterns. 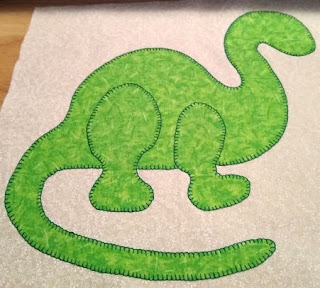 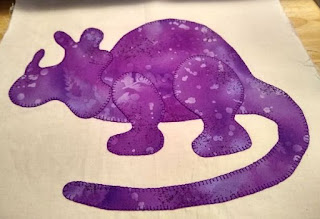 There is a small black eye that will be put on before it is assembled.  I was debating about using some small black buttons but think I will either embroider the eyes on or fuse on a small circle.  That way if somebody wanted to use it as a small quilt instead of a wall hanging they can.