Yes I had another d'oh moment.  Remember when I was talking about the embroidery floss for the Mini Owl cross stitch?  I went to Lotti's Keep, the closest cross stitch shop, which was 15 miles away, and managed to fill in the last of my missing numbers for both the Mini Owl as well as William Morris' The Holy Grail: the left side - arming the Knights.  I had a nice talk with the owner and drove back.  Between what I had gotten in DeKalb and what I had gotten at Lotti's, I had around 40 skeins to wind on bobbins.  Before I would tackle that job, I decided to go out to the kitchen and get something to drink.  As I was passing through the craft room I glanced down and there it was.  There was a plastic container full of bobbins that I had wound earlier and what picture was on the top of that plastic container?  What picture was taped to the inside of the CLEAR plastic container that would tell me what the floss in the container was meant for?  Yep, you guessed it.  It was a picture of the William Morris The Holy Grail.  Clear as day I could see what it was.  Where was it when I was looking for it?  Where was it when I was buying the 40 skeins of floss that I thought I needed?  Yep, It was another D'oh Moment.  Of course it isn't a total waste since I will eventually use the floss but still.... 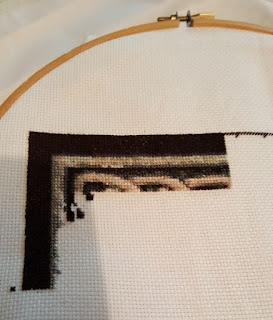 Then to justify the buying of the embroidery floss, that I didn't need, I pulled out the fabric and started to work on The Holy Grail.  I didn't take a picture yet of that because the first 200 or so stitches are all white.  Somewhat boring to work on and somewhat boring to look at.  As soon as I get some other colors in it, I will take a picture.

I hope you all have a great night/day and even better tomorrow.

Guess what I am doing this afternoon!

When you see this picture I bet you will guess what I am going to be doing this afternoon. 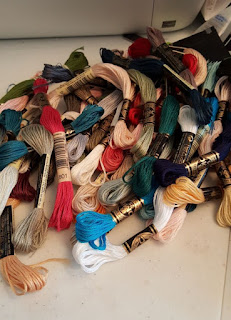 Yep, you guessed it.  It's floss winding time again.  These are most of the colors I need for the counted cross stitch chart for William Morris Holy Grail detail Arming Departing Knights by Orenco Originals.  I started to gather the floss since I need 4 colors to carry on with my mini owl and I can't find them all locally.  Of course I also couldn't find all of the 48 colors I need for the Holy Grail chart either.  I'll just carry on my search for the numbers.  I can probably find it at the cross stitch shop in Rochelle, IL.  I thought I wouldn't be able to get there until Saturday but I checked online and Lotti's Keep is open today according to their Facebook page.  I think I'll run over and see if I can pick up the missing colors.  I'll let you know how it turns out.

Here is my update on my Mini Owl.  This is around 1400 stitches.  It's coming along but slowly.  That's ok.  I'm doing it because a)I love to do cross stitch and b) if I hurry it won't be relaxing and the stress relief that I look for when I do cross stitch. 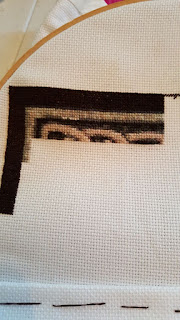 Wish me luck!  I'll let you know how it goes.

Brace yourselves!  I am posting a scary picture.  You might have guessed it...it's a picture of me.  I thought I'd post another one since I've lost some weight.  Since March 1st, I've lost:

Sorry about the background but it was the only place I knew that had a full length mirror.

Another shocker is that now that I've started to feel better, and now that I found where I put my clip on magnifiers, I started to take a few more stitches on the cross stitch project (mini owl).  Of course that means I needed to make some more needle minders.  I found some cute buttons so used them this time.  What do you think? 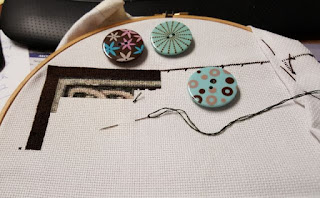 Yes that is my mini owl that they are attached to.  I'm making slow progress on it but then I've never been a fast cross stitcher.  Actually I've never been fast in any of my crafts.  I will get it done though.

Break time is over so I have to go.  I hope everybody has a wonderful day/night.

I haven't been feeling good lately so haven't done a blog post recently either.  My apologies to all my readers.  It's surprising sometimes how drained you get when you aren't feeling well.  In my case it is a pinched nerve.  I am better but still use a cane to walk with just in case I get wobbly.  Muscle relaxers are fun stuff at times.  :)

Since I haven't been mobile for any length of time, I haven't done any stitching either.  :(

I came back to the office today and much to my surprise (and delight), my herbs that are growing in the AeroGarden shot up quickly.  They were planed on 8.7.17 and this is what they look like today. 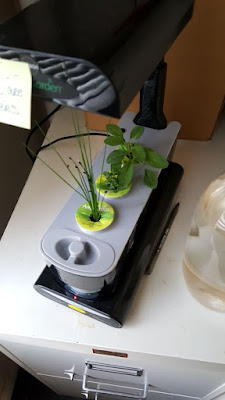 Chives in the front, Lavender in the middle, and Sage in the back.  I think I will have to cut my chives down soon but that's alright.  I love chives on potatoes so I might do that.

My lunch hour is over with so I must go back to the desk and weed through everything.    I hope everybody has a great day/night.  I will soon be getting back to stitching and when I do, I'll share pictures.