I came back to work only to discover that somebody had dropped off in my office some fabric!  Wasn't that a great surprise for a Monday?

Theresa found this fabric somewhere and liked all the Christmas themed fabric so she picked it up for me.  I'm to help her do two projects for Christmas and I hope she remembers which ones they were because I'm not sure that I can right now.  She hinted that if I didn't want some of the blue fabric with snowflakes on it perhaps it could be used in her two projects.  Of course I love it but I will set it aside so that she can use it.  I just won't tell her that ahead of time.  hehehe...

I separated out the fabric and found that there duplicates so I stacked all the duplicates up together.  I think I will have to wash these and iron them before putting them away but that's a small price to pay for getting free fabric, right?!

So, without further delay, here are pictures of the fabric that she gave me.

I did it!  I set some goals for this weekend and I met the goals.  Besides doing icky stuff like laundry, I needed to get one quilt block done in preparation for June Beginner BOM in a facebook group I'm an administrator on.  I also needed/wanted to finish sewing the circles on to my repurposed wall hanging.

So let's start with the repurposed wall hanging shall we?

This started out as a test project called Dust Bunnies.  I liked doing it but it wasn't one that I would keep for myself so I took off the bunnies that were sitting on the dust pan which was in the middle of this wall hanging and then decided to add a bunch of circles.  :)  I like it a lot better and also it shows that you can redo some things without taking everything apart!

The block that I needed to get done is for my facebook group Creative Rectangles.  The other Admins and I are  offering two free BOMs this year.  One is for beginners and one is for intermediate levels.  I decided I would do the beginning ones so here is June's.  I wanted to get it done ahead of time to show people.  It's a spool block. 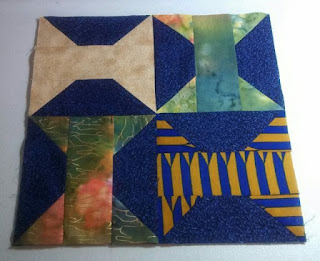 I never realized that the spool block kind makes a pinwheel affect in the middle.    I think I like that.  I also used the front and back of one of the fabrics.  The metallic is the front of the fabric (lower left) and the back side of the fabric is shown in the upper right.

Here are the other Beginner BOMs blocks that I have done. 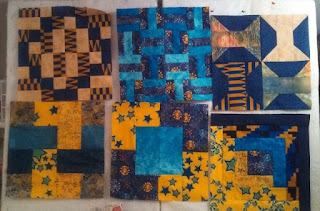 I think in my next block or two I might have to use more tan fabric so that the one block isn't all by itself.  This isn't the order that I'll put my blocks in and I'll probably put sashing between them but it will give you an example of them.

Time to get back to cross stitching.  :)   Everybody have a great day.

Here's to finishing something!

The end of the semester at work
The end of a fiscal year at work
tuition waivers at work
A new course started with FutureLearn
My car breaking down
Never enough money (of course)
and started to work on UFO's.

The work things are ongoing.  Even though the semester has ended, it is now time to do the dismissals and academic probation letters.  I don't have to do that part but I do have to check the names because it will affect some of the offers for graduate assistantships and fellowships that my office made. As far as tuition waivers are concerned, that is an ongoing thing.  Job Security right?

Have you heard about FutureLearn?  It's an online community that you can take courses through.  I am taking a couple of courses through there.  Not for credit or anything but something to keep my mind sharp a bit or at least not so dull.  I'm into the second week of a pre university writing course.


Then the car broke down.  According to the diagnostics that were run on it, there were three possibilities.

1.  Cam sensor was bad
2.  The wires were just disconnected.
3.  One of the belts is bad and it's the one that you have to disassemble the engine to get to (forget it's name right now).

With everything that is on my plate to pay it seems like I never have enough money.  Actually I'm not sure there is such a thing as enough money.  It has, however, made me search through my stash and see what I can work on.

Remember the Angel hot plate that I had?  FINISHED IT!  WOO HOO!  Here it is.


You can see the outline of the rest of the acrylic hot plate in "the Back" picture.

After I finished up the Angel I started a new cross stitch pattern.  It is a kitten hanging onto a limb which says "Hang in there".  But I stopped after a bit because I wanted to try a couple of cooking things.

The first thing I tried was Ziploc ice cream.  I like how it turned out but it melted pretty fast so I guess that meant I just had to eat it quicker right? 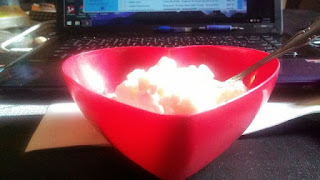 Then tonight I mean pinwheel Pizza roll ups.  The first time I tried that recipe. 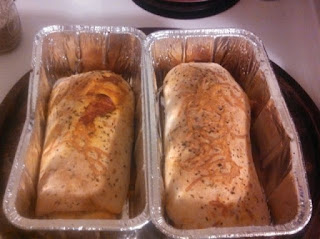 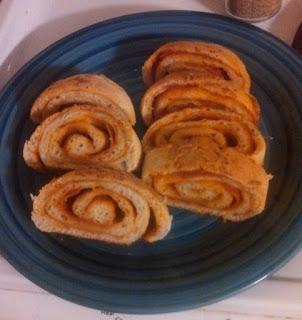 The flavor was good but it needs tweaking some.  I'll let you know how it does if I do make it again.

Can't say that I've done any quilting today but I did go through some more totes from storage and separate them into stacks.  The stack that needs to be shredded, one that goes into the sewing area, one that goes out to garbage.  Then I rearranged the room a little bit so now I can use my floor hoop/stand. I have it set up more for cross stitch and embroidery than for quilting. 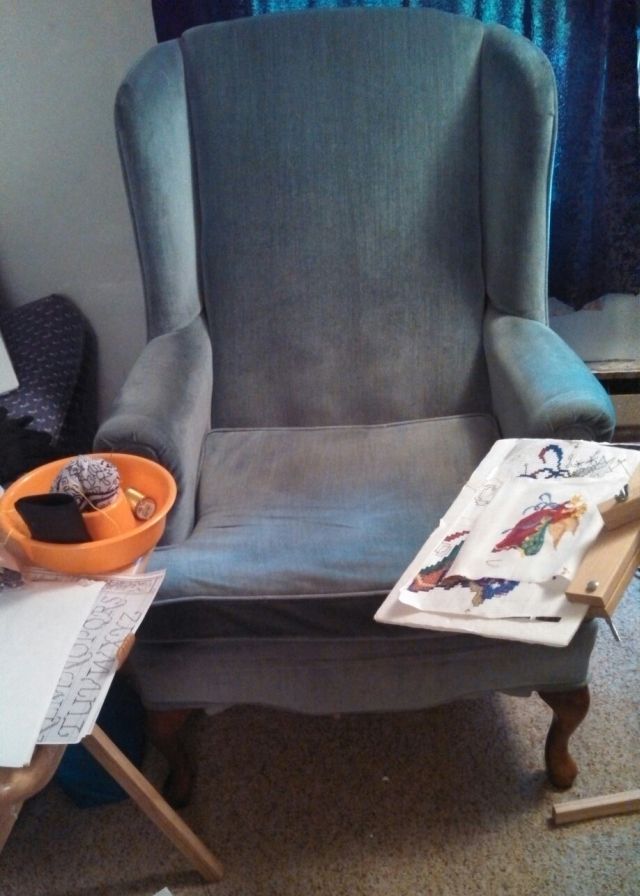 I'm still working on the 5" angel that will go underneath plexiglass for a hot plate or trivet or whatever it is called.  I can't decide if I will undo the French knots for the angels halo or not.  I'm not particularly happy with how they look and am not sure they are needed. 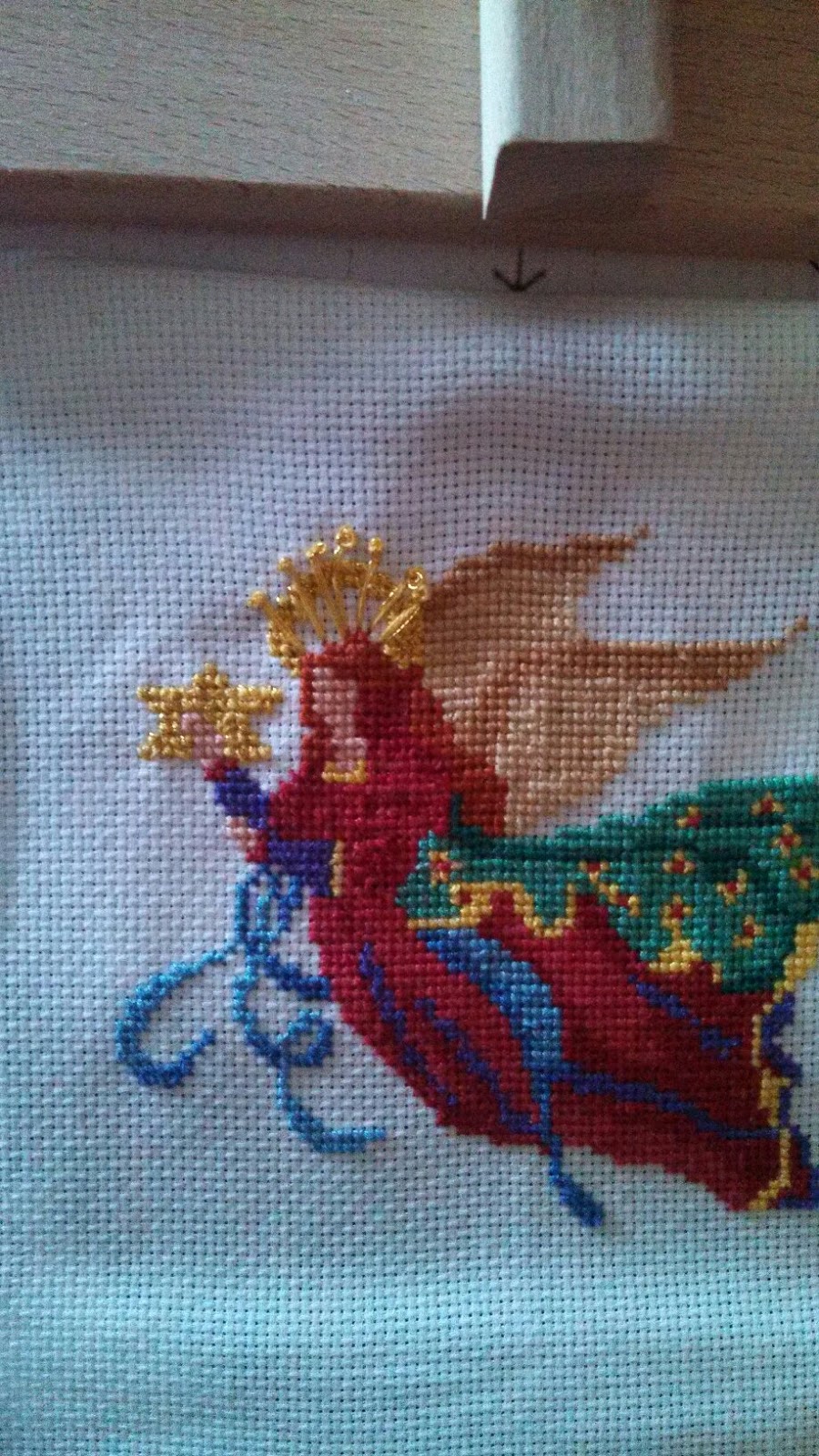 I'll decide that in a day or two.

I did receive a surprise in the mail today.  One of the ladies from one of my facebook groups sent me three charm packs.  They are all three the same and guess what!  It is Stonehenge chips!  I love Stonehenge fabrics.  And these are blues which even make it better! 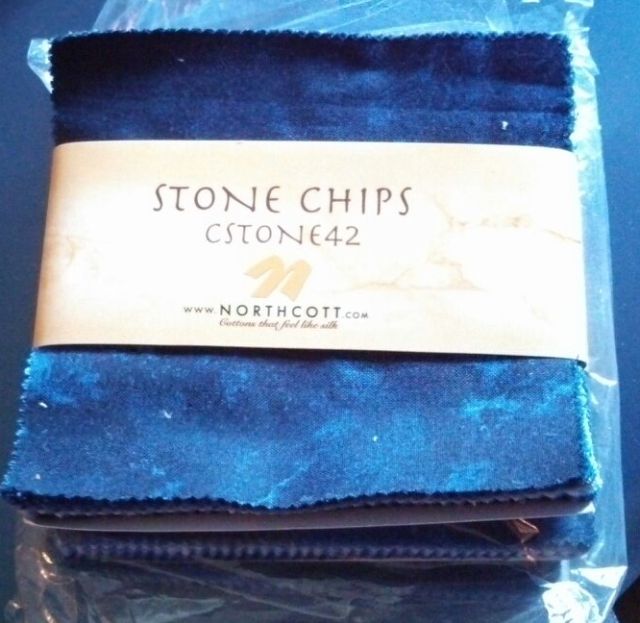 They just came out of the blue.  It was a wonderful surprise!

Time to get back to some sorting or perhaps tackle some of that shredding.  Everybody have a great weekend.  I hope it is as nice where you live as it is here.  Today has been in the 70s and sunny.