It's been a long month but I think I'm starting to get back into doing some things.  I actually picked up an UFO to work on which is the teapot BOM from 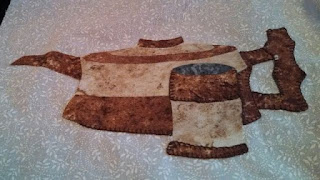 I think I will have a goal of finished up at least one teapot per week.  More on the weekends where I don't game and I can quilt or craft.    The other applique that I wish to do this weekend is two more blocks for the Walter Reed block donation.  I have these four done. 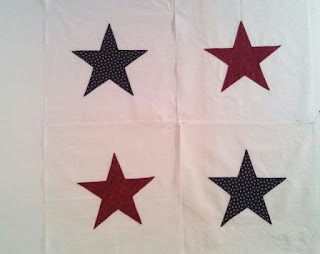 I have two more red blocks fused on and just need to applique.  After that I will do two blue ones and then send them off to the lady who will be putting together the quilts.  It's a simple design and easy to stitch.  That's nice to do in the evenings when I'm brain dead from work.  LOL.

I should be working on the September Beginners BOM this weekend.  Not sure if I'll get to that or not.  It's a Chevron pattern if I remember right but I will have to look and see if I have the right fabrics around to do it.

At least I am getting back into crafting and it feels good.  Now I had better post this before I forget and then wonder I haven't seen anything.

I hope everybody has a great weekend.

Can you guess what I'm going to do with these? 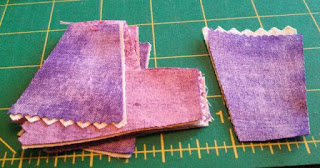 They are small but they started out as rectangles.

Does it help if I show you this? 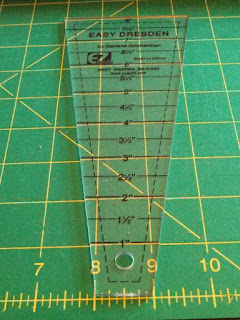 Did you guess a Dresden Plate?   You are right but I am doing a test block for the latest Missouri Star Quilt Company video called Dresden Plate Squared or something like that.  Basically it is a Dresden Plate that has been cut into a square.  Put sashing around the block and you have it.  MSQC used a layer cake but I had some 5" squares so used them.  Tomorrow I will probably sew them together for the mini block.  It will probably be made into a mug rug.  I will take a picture when it is done.

Speaking of pictures.  The Quilt Pattern Magazine has released the August edition and I tested the pattern called Garden Veggies.  I'm not so much into vegetable fabric but I did find these and liked how it looked.  The center square was blank so I added a charm to it.  It is now hanging up in my office. 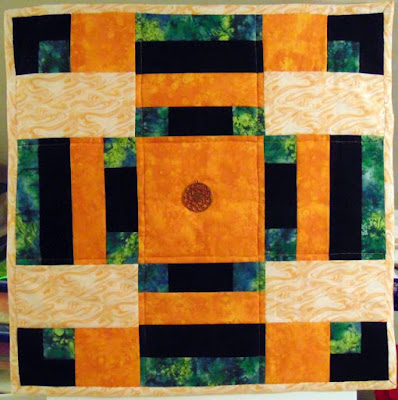 Well that's about it except for my cross stitch.  I ended up framing the "Hang in There" picture so that is another Christmas present done.  I will post that probably next week.  It's not center quite right but the person it is going to is quite handy and I will let them try to adjust it if they want.  Then last thing *I* want is me messing up shaving off the center border just to see the "e" a little better.

Well my cross stitch NOEL is calling me again so I will say goodbye for now.  It is still not ready to show you yet since it's just straight lines so far.

Have a great day!