When it Rains it Pours

Just in the middle of getting into the spirit of things for the holidays my brother Tony got sick.  I mean really sick.  I've spent the last couple of weekends with him in hospitals or nursing rehab trying to make sure that he is getting fit for bypass surgery.

Wednesday he went to the doctors for his pre surgical consultation and wouldn't you know it?  it's been postponed again.  It was suppose to have been on Thursday and they postponed it until Monday.  Ok.  That wasn't too bad. He came back from the visit and was tired.  Not unusual since he hadn't had anything to eat since breakfast and it was around 5 p.m.  Not good for a diabetic.  I think he must have had something because his blood sugar levels were ok (actually they were better than normal) but either way he was kind of out of it.  Later that night the nursing home rehab center (referred to as nursing home from now on) sent him to our local hospital because of change of mental state and blood in urine.  His mental state was he was getting incoherent.

Now this is where the timeline gets a little fuzzy.  Somewhere around 8 p.m. Kerm (other brother) called me to say tony was in hospital.  I went there.  We left around 10 when they were admitting him into a room since they had sedated him so he would breath easier (his body wouldn't be fighting against the oxygen they were giving him).  The I got a phone call at midnight that said Tony had had a heart attack and they had him in ICU.  Back to the hospital where I stayed with Kerm until almost 4 a..m. During all the testing he was found to have had a heart attack, his kidneys aren't functioning 100% efficiency (not total news since his meds had that as a side affect and he gets it tested regularly), and that he might have pneumonia.  They were going to have to keep him sedated and run more tests.  Today (umm.  guess same day but this afternoon) they found out that he has a bag (a BAG?!) of fluid on the outside of his lungs which have been putting pressure on the lungs.  They aren't sure if this is why the tests red that he had pneumonia or not...more tests.

He's survived the 24 hours which are the most critical but still in ICU.  24 hours down, 48 to make it through.  It will be a long haul yet.  After this he'll have to start back at zero for rehab and once again work up strength to have bypass surgery.  IF he makes it that far that is.

Oh well that is why I haven't posted much or done much in quilting. I AM working on Ms. snow for my mothers 92nd birthday  (on the 10th) in her favorite colors.  They could have had more contrast but this IS mother.  Her favorite flower material is the vest.  Iit has been good because it gives me something to do while waiting for news.  The vest is a little more even.  This picture was taken before it was fused on.  It is about a 12.5" block.  That is the size that works out best for moms wall hangings above her bed.  I will put a narrow border on it.  I might put on a white border and back since mom likes white and it will tie in with Mrs. Snow. 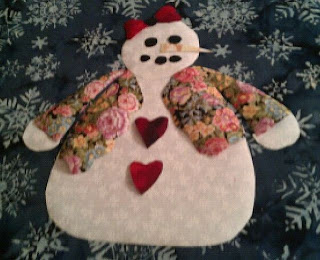 I will also start to do some counted cross stitching again....and ummm..... my retail therapy of $50 worth of material for a project.  hehehe