It has been a nice and tranquil Sunday so far.  now that I am thinking on what I did, I am surprise at how productive I was.

Ready for a couple of pictures?

This is the finished snowflake wall hanging.  I will probably put it up at the office when I return in January.  Right now there is a red quilt (or coverlet) hanging which is pretty festive which I will leave up for December. 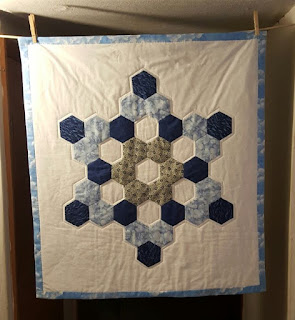 It's not as wrinkly as it looks.  I will need to take the iron to it before hanging it up at the office I think.

The Gnome and Critter cross stitch is a fun piece to work on.  The rabbit is almost finished.  The green that you see is the base for the Christmas tree.  There is a bird by the rabbit that is starting to come into being now.  It wont' be done for this Christmas but I'm sure I can finish it for next Christmas. 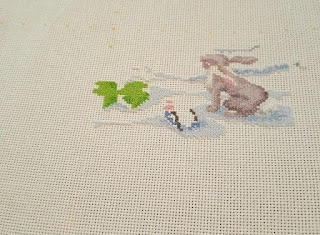 It's getting late and I want to get some more stitching in so I'll leave you with a winter scene since it was a tad chilly today (barely above 30F).  This is a place I'd love to be stuck in as long as I had my craft stuff with me.  :)