Ahhhhh.  Sunday.  When I was growing up Sunday was a special day.  Nobody had to work (except chores of course) and there always was a special dinner waiting for us after church.  Pot roast with all those delightful roasted veggies with it was reserved for a Sunday meal.  Sunday was a day of football watching (something I could do with my brother Tony and my dad).  These were extra special to me because I lost my dad when I was in sixth grade so my memories of him only cover so many years.  I would sit between Tony and Dad (just because) and when the game was on I would pester them with questions like "Which is our team.  Did we do good?  Where's there ball?"  Finally I learned to track the movement by a reverse learning method.  Dad would say "See that pile of players?  Underneath it all is the ball."  I then started to look for that pile of players and eventually learned to follow the path of the football.  I still had to ask "which team is ours" but I don't think they minded that too much.

Sunday was also the day when mom would pull out some mending to do.  Darn those socks for dad or repair a hole in our jeans or teach us to embroider.  I'm sorry that I didn't keep it up like she wanted us to but kids being kids always wanted to do something different. Mom would get plain white towels (flour sack I believe) and draw lines on them.  My sister and I were told to stitch (running stitch) across those towels and when we were done mom would fold them up and put them in our turkey boxes which she called our hope chest.  Dad worked for a turkey farm and we lived on the premises so our boxes (which came in all sizes) always were for turkeys.  Think I should have learned a lesson or taken a hint about that?  LOL.

Eventually Mom would buy a pink checked apron and we would have to practice making X's on every other square. 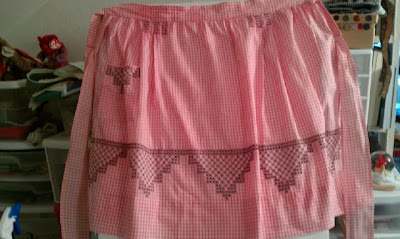 Of course we had to do something on the apron ties too.  This is the only example I have left and I know that *I* didn't do the stitching.  I am assuming grandma did because she wouldn't be seen without her apron. 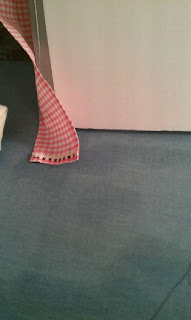 After grandma had passed away and mom inherited some of her embroidery blocks Mom gave them to me.  There wasn't enough to do a full quilt but I managed to do plain squares and made this for mom on one of her birthdays (I think it was 83).  Grandma had done the squares when she was in her 80s so I wanted it give it to mom around the same time.  Mom picked out the backing material and the sashings were done AFTER the whole quilt was sewn.  They were an after thought so they ended up being appliqued on.  :)  Here is a pic of it but I didn't have room to totally lay it out.  It's large enough to fit a full size bed. 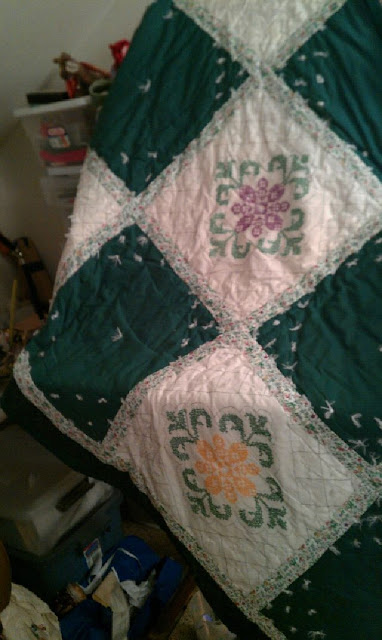 Sundays was also visiting day.  The day when Aunt Rachel might come over.  Aunt Rachel was dad's sister and we didn't see her much and she wasn't one of those "huggy" type of Aunts.  She didn't talk much but she did know how to crochet.  She made everybody an afghan when they graduated.  It was the only time they got an afghan from her.  I graduated in 1974 and still have mine.  When it started to show signs of wearing out (I did use it every day after all) I put it aside in my chest. 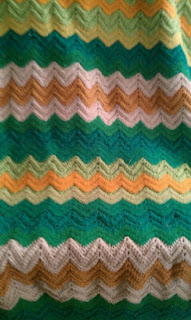 She was really great at crocheting.  She could look at a pattern and duplicate it.  I wish that I had gotten some of her table clothes.  They were truly works of art.  She was a perfectionist though and I never could learn how to crochet from her.  I'm lucky that I can do any crochet stitches!

So....in remembrance of my crafty family, I am going to sign off and do some hand applique.  It is much more relaxing then machine applique.  :) 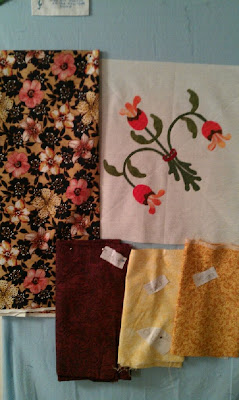